You are here: Home / Life / Human Heartbeat and Fibonacci Patterns 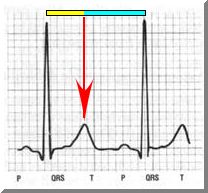 A peaceful heartbeat is said by some to beat in a Phi rhythm.

The prominent parts of an electrocardiogram (ECG or EKG) are the P wave, a deflection caused by the current originating in the atrium; the QRS complex, showing the passage of the electrical activity into the ventricles; and the T wave, as the ventricles reset themselves.  The electrocardiograms (ECG or EKG) of human heartbeats vary considerably depending on a variety of factors.

The former site Heartbeat2000 saught to study the relationships between the physical heart and the spiritual heart, that is the soul, of human beings.  The views presented there suggest that a heartbeat that produces a phi relationship in the T point of the ECG represents a state of being that is one of health, peace and harmony.

While this is an area that still needs research and scientific corroboration, it is an interesting perspective on another potential appearance of phi in life.

EKG’s show a resemblance to the Fibonacci Convergence.

The first numbers in the series give an approximation of phi.  For example:

Curiously, if you graph these approximations of phi in the series above you get the chart below, the first part of which bears a similarity to the EKG pattern of the human heartbeat. 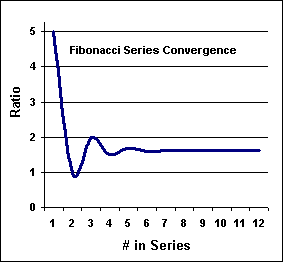 The law of his (e.g., David’s) God is in his heart; none of his steps shall slide.  Psalms 37:31Insight on relationship of Fibonacci Convergence contributed by Robert Bartlett, who notes: