There are many misconceptions and misrepresentations about the golden ratio. Some look too fervently for patterns and say it exists where it really doesn’t. Some whose goal is to debunk golden ratio myth say it doesn’t exist where it really does, missing the obvious and often not stating what proportions appear instead. People on both sides often just repeat what they’ve heard rather than personally performing the analysis required to support their conclusions. Intelligence and education are not always factors in getting to the truth, as even Ph.D.’s in mathematics sometimes get it wrong. As the author of this site since 1997, I’ve changed my views and the information on this site as well. Let’s look at some of the common points of confusion and debate, covering beauty, the Parthenon, the UN Secretariat Building, the Great Pyramid, Nautilus shell, use by famous artists (Da Vinci, Botticelli, Seurat, etc.) and other topics. I’ll provide objective answers, with additional evidence in the supporting articles for each topic. I’ll also welcome any evidence to support opposing views.

Golden ratio proportions of the teeth/lips and nose in relation to
the distance from the pupils to the bottom of the chin.

1. Does the human face reflect golden ratios in its proportions?

Not everyone will agree, but there is much evidence to demonstrate that the answer is “Yes.” There’s some truth to the adages “beauty is in the eye of the beholder” and “beauty is only skin deep,” yet there is no denying that there’s almost universal agreement when asked to distinguish between a very attractive face and a very unattractive face. Let’s acknowledge that every human face has many unique measurements and proportions. As a result no single measure can be said to apply to every aspect of every face. The real question is whether the golden ratio represents an average or ideal in human facial dimensions. The even more interesting question is whether golden ratios in facial features impact our perceptions of attractiveness and beauty. Debunkers will point out the variations, and perhaps suggest that those who find golden ratios in a beautiful face did so because they were looking for them. Consider the following studies though, which demonstrate that the connection to beauty is based on much more than looking for data to fit the desired result:

2. Does the design of the Parthenon reflect the golden ratio? 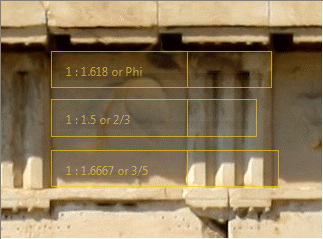 These golden ratios may or may not have been included intentionally among all the other numbers and ratios represented in the Parthenon. The first written record of the golden ratio was by Euclid, almost 100 years after its construction though, so the architects of the Parthenon did not learn of it from him. Plato was born not long after it’s construction and adopted the pentagon star as the symbol for his group of followers, so that suggests there could have been awareness of special geometries using the golden ratio in that era. The Parthenon has a complex design that embodies many numbers and mathematical relationships. It’s not unreasonable at all that the golden ratio would have been among those represented.

3. Is the spiral of the Nautilus shell based on the golden ratio?

4. Did Renaissance artists (Botticelli, Da Vinci, Michelango) use the golden ratio in composition of their paintings? 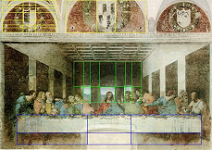 Yes. This is often contested by debunkers as being completely unsupported. One frequently referenced article by a Ph.D. in mathematics points out that there is no mention of the golden ratio in two biographies written about da Vinci. Wouldn’t it be better to actually measure the paintings than to read a biography?  Another debunker, also with a Ph.D. in mathematics, claims there is “no evidence” that da Vinci used the golden ratio, but in his presentation shows only da Vinci’s simple sketches rather than his masterpiece paintings on religious subjects. Unfortunately, most commentary on da Vinci’s use of the golden ratio in his paintings is based on The Mona Lisa, which has very few linear composition elements from which to definitively measure a golden ratio. Golden ratios are really quite easy to see if you have the right tools.

As noted by “Civilisation” author Kenneth Clark, “This union of art and mathematics is far from our own way of thinking, but it was fundamental to the Renaissance.”

5. Are the spirals seen in nature based on the golden ratio?

Some are, but most are not. The spirals most commonly seen in nature are equi-angular (aka logarithmic) spirals. This simply means that the spiral expands at a constant rate. This occurs because it creates an even flow of energy or distribution of tension. This has nothing at all to do with the golden ratio. Accordingly, all the illustrations of spiral arms of galaxies, curves of ocean waves, spiraling hurricanes, etc. that are incorrectly identified as a “Golden Ratio” or “Golden Spiral” should be relabeled or removed to avoid further confusion in perpetuating this golden ratio myth. There is another type of spiral that is related to the golden ratio, however, that occurs very commonly in nature. The spirals that appear in pine cones, pineapples, seed pods and similar plant structures are usually based on two successive numbers of the Fibonacci sequence. For example, if there are eight spirals in a clockwise direction, you will find thirteen spirals going in the counter-clockwise direction.  Neither of these spirals is necessarily a “golden ratio” spiral on its own, but the ratio of these successive Fibonacci numbers approximates the golden ratio.

6. Did French painter Georges Seurat use the golden ratio in the composition of his paintings?

Yes. One art critic claimed that Georges Seurat “attacked every canvas with the golden section.” At least one debunker says this is a simply “myth that needs to be dispelled.” The truth is somewhere in the middle.

So the correct answer is that Seurat frequently used the golden ratio in his artistic compositions, but probably did not attack every canvas with it.

7. Is the Great Pyramid of Giza based on a golden ratio?

Possibly, but unknown. This is also subject to debate and interpretation, and there is no certain answer. There is no mention of the golden ratio in the existing historical record of the Egyptians. The outer limestone skin of pyramid is now missing, which makes its exact original dimensions subject to some estimation. The outer skin is still intact at the top though, and thus provides good guidance as to the original form. What we do know is this:

Other geometries are also possible, one based on surface areas and another on gradients using Egyptian units of measure. There is also evidence that the relative sizes and positions of the pyramids at the Giza site embody golden ratio proportions. The truth is that there is much that we do not know about these pyramids or their construction, so the dimensions could be based on any of these methods and geometries. The Great Pyramid was clearly constructed with some specific geometry in mind, and with exacting precision, so we can reasonably assume that its architects did not create a pyramid with these very special and unique geometries by blind chance. A very interesting question still remains: Even if the pyramid wasn’t consciously designed with a knowledge of phi, why did they pick a geometry for the Great Pyramid that so closely embodies the golden ratio, the one number that has a ubiquitous presence in geometry, and that is associated with nature and beauty?

8. Is there a “new golden ratio” that can determine facial

No. The 2009 study claimed to have debunked the relationship of the golden ratio to beauty and claimed to have discovered two “new golden ratio” measurements that defined attractiveness. The faces identified as the most attractive, however, had over a dozen golden ratios in the dimensions of their key facial features. The researchers apparently didn’t realize these golden ratios existed and devised their own alternative measurement points. It should be obvious that human facial beauty cannot be reduced to a single vertical and single horizontal measurement, and it’s quite easy to prove this with a few simple examples of unattractive faces that still happen to fit those two measurements.

9. Is Mecca at the golden ratio point of the Earth? 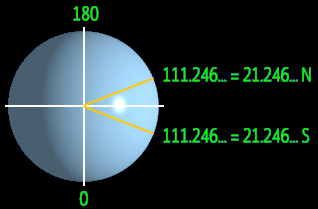 10. Is the design of the UN’s Headquarters building based on the golden ratio?

Yes. This was supposedly “debunked” in an an article by Dr. George Markowsky, a Harvard Ph.D. in Mathematics, who calculated the simple ratio of the building’s height to width. He noted that the ratio was 1.76 and not 1.618, came to his conclusion, and missed many historical and mathematical facts. One of the lead architects, Le Corbusier, created a design system based on the golden ratio just years before his involvement with the UN project. A well-known, award-winning Disney education film illustrates that the golden ratio relationship is based on three horizontal golden rectangles stacked vertically, not its height vs. width. Golden ratios appear in the visual dividing points on the face of the building, and these are easily can be measured and calculated. Other very clear golden ratios are present in the dimensions of  the curtain wall, windows and front entrance.

Is the golden ratio unique and special, or a myth to be debunked?

It quite definitely a special number with unique properties and it is found in nature, in some quite unexpected places. Even those whose goal is to debunk golden ratio myth will agree that the golden ratio has properties that make it very unique in mathematics and geometry. This one number has intrigued and inspired countless people throughout mankind’s history, and earned a special place in their hearts and minds. It is probably for that very reason that some people have taken it beyond fact to fantasy and mysticism. That, in turn, has led others to summarily dismiss it with just as much zeal. Both extremes in position are flawed and keep us from knowing the truth and applying it.

Is the golden ratio a universal constant of design in nature? No. Must all features of a face be in perfect golden ratio proportion to be beautiful? No. Can it help us to better understand and appreciate beauty in nature, and apply it in our own lives? Yes.

Is the golden ratio required to create great art? No. Can it help to better appreciate some great art and to create with better composition and design? Yes. It’s used for that purpose in art, photo cropping and composition, logo design, product design and other areas of design.

Like many things in life, it provides us with insight into the nature of things, the opportunity to better appreciate them, and the ability to use them to advantage. With all the misinformation and misconceptions that exist, it is best to keep an open mind, and not accept claims made without investigating evidence on both sides, experimenting on your own and coming to your own conclusions.

The Myth That Will Not Go Away by Keith Devlin

Misconceptions about the Golden Ratio by George Markowsky

Debunked Legends About the Golden Ratio by Julia and Jesse Galef

Other GoldenNumber.net articles on understanding the evidence, and debunking the debunkers:

Dr. George Markowsky on “Misconceptions about the Golden Ratio”

Dr. Keith Devlin on “The one formula that’s supposed to ‘prove beauty’ is fundamentally wrong.”