You are here: Home / Design/Art / Phi, Pi and the Great Pyramid of Egypt at Giza 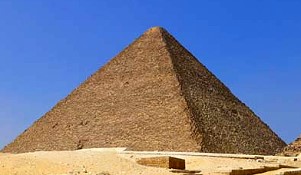 There is debate as to the geometry used in the design of the Great Pyramid of Giza in Egypt. Built around 2560 BC, its once flat, smooth outer shell is gone and all that remains is the roughly-shaped inner core, so it is difficult to know with absolute certainty. The outer shell remains though at the cone, so this does help to establish the original dimensions.

There is evidence, however, that the design of the pyramid may embody these foundations of mathematics and geometry:

So how might the Great Pyramid have embodied these concepts? There are a number of theories to explore.

Update: See also the article on golden ratios in the site design of the Giza Pyramid complex.

A pyramid based on Phi varies by only 0.025% from the Great Pyramid’s estimated dimensions

Phi is the only number which has the mathematical property of its square being one more than itself:

By applying the above Pythagorean equation to this, we can construct a right triangle, of sides a, b and c, or in this case a Golden Triangle of sides √Φ, 1 and Φ, which looks like this:

According to Wikipedia, the Great Pyramid has a base of 230.4 meters (755.9 feet) and an estimated original height of 146.5 meters (480.6 feet).  This also creates a height to base ratio of 0.636, which indicates it is indeed a Golden Triangles, at least to within three significant decimal places of accuracy.  If the base is indeed exactly 230.4 meters then a perfect golden ratio would have a height of 146.5367. This varies from the estimated actual dimensions of the Great Pyramid by only 0.0367 meters (1.4 inches) or 0.025%, which could be just a measurement or rounding difference.

A pyramid based on Pi varies by only 0.1% from the Great Pyramid’s estimated dimensions 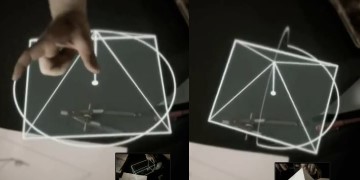 This is only 1/10th of a percent different than the height of 1.272 computed above using the Golden Triangle.  Applying this to the 146.5 meter height of the pyramid would result in a difference in height between the two methods of only 0.14 meters (5.5 inches).

In addition to the relationships of the pyramid’s geometry to phi and pi, it’s also possible that the pyramid was constructed using a completely different approach that simply produced the phi relationship. The writings of Herodotus make a vague and debated reference to a relationship between the area of the surface of the face of the pyramid to that of the area of a square formed by its height. If that’s the case, this is expressed as follows: 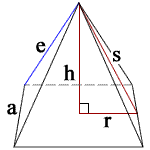 We also know by the Pythagorean Theorem that:

so by substituting for h² on both side we have:

Let the base r equal 1 to express the other dimensions in relation to it:

Using the quadratic formula, the only positive solution is where s = Phi, 1.618…..

This same relationship is shown on the Mathematics of Phi article, where we how Phi is calculated based on dividing a line so that the ratio of the line to the larger section is the same as the ratio of the larger section to the smaller section. If the height area to side area was the basis for the dimensions of the Great Pyramid, it would be in a perfect Phi relationship, whether or not that was intended by its designers. If so, it would demonstrate another of the many geometric constructions which embody Phi.

A pyramid based on a constant gradient varies by 0.8% from the Great Pyramid’s estimated dimensions

Yet another possibility is that the Great Pyramid is based on another method, known as the seked. The seked is a measure of slope or gradient. It is based on the Egyptian system of measure in which 1 cubit = 7 palms and 1 palm = 4 digits. The theory is that the Great Pyramid is based on the application of a gradient of 5.5 sekeds. This measure means that for a pyramid height of 1 cubit, which is 7 palms, its base would be 5.5 palms. The ratio of height to base then is 7 divided by 5.5, which is 1.2727.  This is very close to the square root of Phi, which is 1.27202. The slope of a pyramid created with sekeds would be 51.84°, while that of a pyramid based on phi is 51.83°. The seked method was known to be used for the construction of some pyramids, but not all. If used on the Great Pyramid it should have resulted in a height of 146.618 meters on a base of 230.4 meters. This is 0.118 meters (4.7 inches) greater than the actual estimated height of the Great Pyramid. This variance of 0.8% thus does not match the geometry of the Great Pyramid as closely as the geometries based on phi or pi. This result is very close to the dimensions of the Great Pyramid. The question remains though as to why 5.5 would be chosen over some other number for the gradient. What was more appealing about 5.5 rather than simply using a gradient based on 5 or 6? Even without a mathematical knowledge of Phi, a simple awareness of the golden ratio observed in nature might have led choosing this proportion.

Illustration of the Seked method (Image credit to David Furlong): 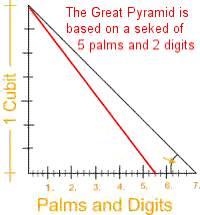 One thing that is clear is that the dimensions and geometries were did not happen by chance.  Would a civilization with the technological skill and knowledge to align the pyramid to within 1/15th of a degree to true north leave the dimensions of the pyramid to chance?  If they did not intend the geometry that resulted in a rather precise angle like 51.83 degrees, why would they have not used another simpler angle found in divisions of a circle such as 30, 45, 54 or 60 degrees? Only one other Egyptian pyramid used this geometry or angle of incline, the Meidum pyramid, and it’s a step pyramid with three tiers. Given that there are several ways based in simple geometry by which the Great Pyramid could have ended up with this precise angle, it seems unreasonable to suggest that none of them apply, until another equally plausible and accurate theory can be presented.

Other possibilities for Phi and Pi relationships

If the Egyptians were using numbers that they understood to be the circumference of the circle to its diameter or the golden ratio that appeared in nature, it’s difficult to assume that they truly understood the actual decimal representations of pi and phi as we understand them now. Since references to phi don’t appear in the historical record until the time of the Greeks hundreds of years later, some contend that the Egyptians did not have this knowledge and instead used integer approximations that achieved the same relationships and results in the design.

The Great Pyramid could thus have been based on 22/7 or 14/11, which is the same as 7/5.5, in the geometries shown above.  Even if the Egyptians only understood pi and/or phi through their integer approximations, the fact that the pyramid uses them shows that there was likely some understanding and intent of their mathematical importance in their application. It’s possible though that the pyramid dimensions could have been intended to represent only one of these numbers, either pi or phi, and the mathematics would have included the other automatically.

We really don’t know with certainty how the pyramid was designed as this knowledge could have existed and then been lost. The builders of such incredible architecture may have had far greater knowledge and sophistication than we may know, and it’s possible that pi , phi or both, as we understand them today, could have been the factors in the design of the pyramid. It could be that they chose other approaches that resulted in almost identical geometries.

A detail of the geomatries and calculations is below:

One fact and one interesting question remains

The fact is that whatever method was used in its design, the end result represents the geometry of a phi-based triangle with a high degree of accuracy.

The interesting question is “why did they choose this specific shape geometry and configuration of three pyramids for the Great Pyramid?” It’s different than the rest and was clearly done with intent. Was it because it appeared more beautiful, more aligned with nature? If not that, what other reasons did they have that captured this one number associated with nature and beauty?

Use the template below in gif or pdf format:

Thanks go to Jacques Grimault for these insights, and for other fascinating facts and speculations presented about ancient pyramids in the movie on “The Revelations of the Pyramids.”