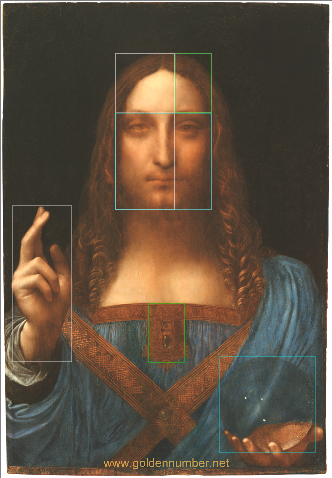 Golden ratio proportions in composition of Salvator Mundi starting with golden rectangle for the head.

2017 Update – Salvator Mundi, “the last Leonardo” sells for a record-breaking $450,312,500, decimating the prior world record for the most expensive work of art sold at auction. See Christie’s article and learn below some of what makes this piece so incredible and valuable.

In 2011, the discovery of a lost painting by Leonardo da Vinci was announced to the world. This painting, Salvator Mundi, had been in the art collection of King Charles I of England in 1649, was auctioned in 1763 and then lost for many years. Its recovery was led by Robert Simon, an art historian and private art dealer, and it was restored by Dianne Dwyer Modestini. Many unique qualities of this painting led experts to confirm that it is indeed an original work of Leonardo da Vinci, one of only fifteen now in existence.

Da Vinci and the Golden Ratio in Art Composition. A lesson for all artists and designers.

This article reveals new insights into da Vinci’s genius that can be found in this painting. Da Vinci created the illustrations for the book “The Divine Proportion” written by his contemporary, Luca Pacioli. He used the Divine proportion, also known as the golden ratio, in his composition of earlier paintings, including The Annunciation in about 1473 and The Last Supper in 1495. Salvator Mundi was created around 1500, and includes many more clear examples yet of da Vinci’s application of the golden ratio.

These findings can give artists and designers a deeper understanding of how to use the golden ratio in their own works. Da Vinci’s application of the golden ratio is subtle, yet much richer than simply applying the golden ratio to horizons or other dividing points. In this way he creates an overall balance and harmony among all the elements of the composition, similar to the way the golden ratio appears in the human face.

Corroboration by the Restorer of Salvator Mundi

I presented the findings of my work to Dianne Dwyer Modestini. As the art conservator who restored Salvator Mundi, she spent 18 months with this painting and likely spent more time gazing upon it than anyone since Leonardo da Vinci himself. She commented on the analysis, as featured in the video below in this article:

I found that Leonardo thought long and carefully about the Salvator Mundi, since he was trying to create a portrait of a divine being and used a number of devices to achieve the extraordinary presence and power of the image. I’m not surprised that he made extensive use of the golden ratio, the “divine proportion” and it is very interesting to see it mapped out in this way. – Dianne Dwyer Modestini, 2014

Composition analysis with graphics software, accurate to the pixel

The golden ratios presented in the illustrations in this article and the related video were created with PhiMatrix. As its grid is resized and lines are added, every line it creates is in a golden ratio proportion to the ones on either side it, accurate to the pixel.

Da Vinci would have used a different tool of course, perhaps similar to golden ratio calipers used today for design and composition. These calipers exist in various forms, and are quite easy to create. All that is required is a couple of arms with a pivot point at the golden ratio of their length.

With this approach, we can explore the composition decisions that da Vinci likely made in the this creating Salvator Mundi, Christ as Savior of the World. We can appreciate it at a new level, one that reveals not just the genius of da Vinci’s artistic technique, but that of his design and composition as well.

Examples of da Vinci’s use of the Golden Ratio

Portraits have fewer distinct lines that paintings of landscapes and architecture, but there are some very interesting distinct golden ratios that point to its use in the overall composition. The dimensions of key elements of the painting are in golden ratio proportion to one another. Start with a golden rectangle based on the height of the head:

This is illustrated in these three images. Click on any for the full resolution view. 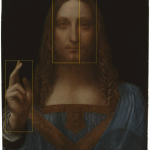 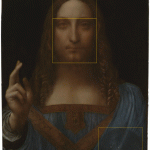 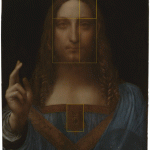 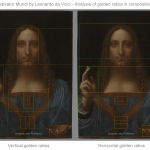 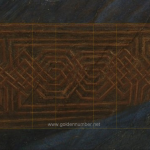 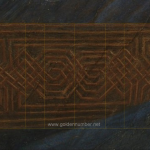 More detailed evidence is presented in our video

A more complete look at golden ratios in Salvator Mundi is presented in this YouTube video. As you watch the video, consider the detailed anatomical studies da Vinci did and imagine him planning and measuring every aspect of each element of this painting. Imagine him striving to capture an essence of the Divine on a two-dimensional, 26” x 18” board. Note the facial proportions, the positions of the hands and fingers, the design and draping of the robe, the intricate details in the patterns of the embroidery, and even the positions of the lights that reflect from the glass orb. Note how so many of them are based on the Divine Proportion that was described in the book by the same name (De Divina Proportione in Italian). In this we can see the genius of da Vinci.

It is recommended that you click on the YouTube button and watch it in full screen mode.
Select 720p from the settings (gear) icon to see it in full HD resolution.

Pacioli and da Vinci in a collaboration of art, mathematics and the spirit

Pacioli said “Without mathematics there is no art.” Da Vinci said “Where the spirit does not work with the hand there is no art.” Their collaborative work, The Divine Proportion, opens with this statement of intent:

A work necessary for all the clear-sighted and inquiring human minds, in which everyone who loves to study philosophy, perspective, painting, sculpture, architecture, music and other mathematical disciplines will find a very delicate, subtle and admirable teaching and will delight in diverse questions touching on a very secret science.

There’s no way to know with certainty if Da Vinci used every golden ratio shown in this analysis in his composition decisions of Salvator Mundi. Some examples are clearer and more undeniable than others. We can reasonably assume that he didn’t just paint Christ as a man in a tunic in the same way as that any other artist would. It’s more likely that he used the same depth of analysis and precision reflected in his other works and illustrations, and in doing so revealed some of the secret science that is touched upon in The Divine Proportion.

Others copied this masterpiece, but none compare to the original

To illustrate the genius of da Vinci in his work, you only need look at copies of Salvator Mundi created by lesser artists who had the opportunity to see this painting before it was lost. Interestingly, these copies were one of the clues that the lost original masterpiece existed: 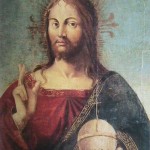 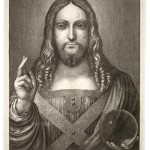 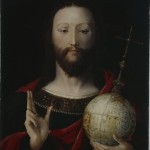 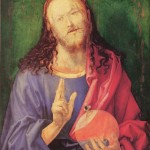 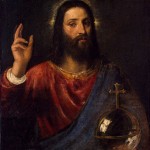 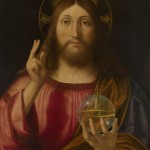 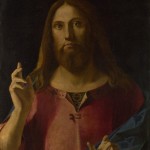 Seeing what da Vinci saw in the Divine proportion.

I hope this analysis gives deeper insight into his genius, gives you a glimpse of what da Vinci saw, and an appreciation of some of the subtle, secret science of the Divine proportion.

For the artists among you, perhaps it will be an inspiration to apply some of these same concepts to your own works by using golden ratios within golden ratios, as is often found in the beauty of nature itself.

Interview on The Story with Dianne Dwyer Modestini: