You are here: Home / Design/Art / Michelangelo and the Art of the Golden Ratio in Design and Composition

New study unveils Michelangelo’s extensive use of the golden ratio in the Sistine Chapel. 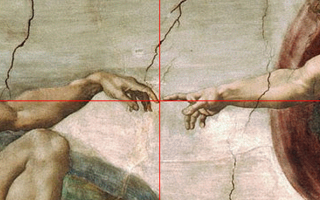 In 2013, I reported that Michelangelo used the golden ratio in his painting “The Creation of Adam” in the Sistine Chapel. This Divine Proportion appears at the point at which Adam’s finger is touched by the finger of God, as God breathes life into Adam.

In July 2015, Clinical Anatomy published an article by a team from Brazil titled “More than a neuroanatomical representation in The Creation of Adam by Michelangelo Buonarroti, a representation of the Golden Ratio.” (PDF here.) The article claimed, incorrectly, that there was no previous association of Michelangelo’s works with the golden ratio. It identified the very same golden ratio touch point as the one reported here two years earlier.

It also claimed, however, a new finding. It claimed that the fingers touched at the golden ratio point of the length of all the paintings on the ceiling of the Sistine Chapel. My analysis of this claim revealed it to be inaccurate. (See separate article Discovery of the Golden Ratio in Michelangelo’s “The Creation of Adam.”) It motivated though me to take a much deeper look at Michelangelo’s composition of his paintings in the Sistine Chapel. This led to much richer evidence yet of his use of the golden ratio.

Over two dozen uses of the golden ratio appear in the Sistine Chapel.

This expanded analysis led to the discovery of more than two dozen examples of the golden ratio. This provides compelling evidence that this “Divine proportion” was an essential guide in the composition of this work. The analysis was performed using PhiMatrix design and analysis software to find golden ratios, or any custom ratio, with pixel-level accuracy.

Perhaps the most stunning example, as shown in my 2013 article, is the point at which the fingers of God and Adam touch in “The Creation of Adam. This is found at the golden ratio of both their horizontal and vertical dimensions. Click on the image for full resolution: 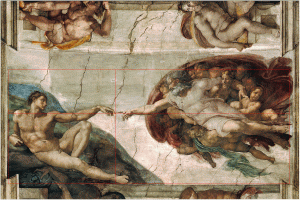 The Creation of Adam by Michelangelo

The same golden ratio point appears if you instead use the inside or outside borders of the painting, rather than the borders of God and Adam. Click on images for higher resolution. 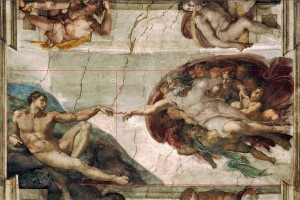 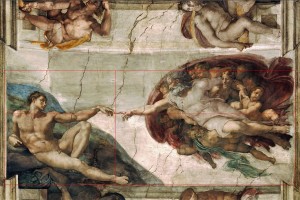 Should it be suggested that this touch point does not actually represent the golden ratio, see the illustration below. The green line shows the difference created by using a ratio of 1.6 instead of 1.618. 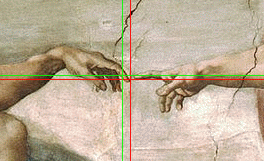 This evidence of its use is rather conclusive in itself, and yet it’s just a subtle hint to the rest of the story that unfolds.

Michelangelo repeated this theme of the characters touching the golden ratio point in other paintings of the Sistine Chapel, as illustrated in the five paintings below. The green lines show the golden ratio of the height and/or width of each painting.

The last of the series of nine biblical narration paintings on the center ceiling is of Noah’s disgrace. In it, the fingers of two of Noah’s sons point directly to the golden ratio points from the painting’s sides. It’s done as if to show the viewer exactly where they are, and the fact that Michelangelo had indeed applied the Divine proportion. After all, this incredible collection of paintings was created for the Vatican, the seat of Peter and successor Popes of the Roman Catholic Church. If he wanted to give evidence to his use of the Divine proportion, he would have wanted it to be clear and undeniable. He may have done so with a bit of wit: 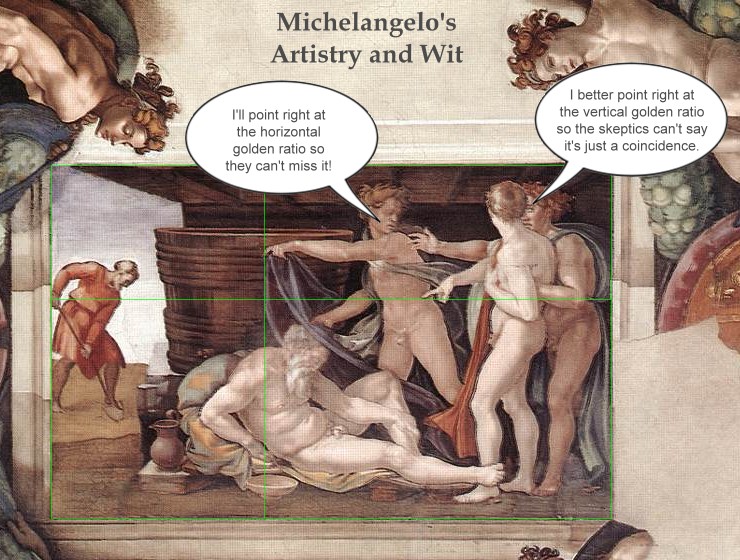 In this and other paintings, the hands are positioned as though grasping this golden proportion. It can be viewed as a visual metaphor of human desire to grasp the Divine. Click on any image for full resolution. 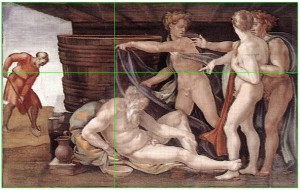 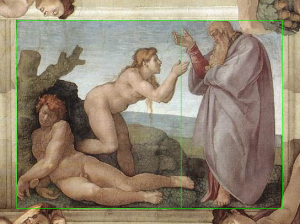 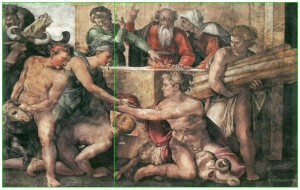 The sacrifice after the flood 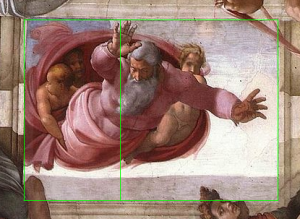 God divides the waters from the Earth 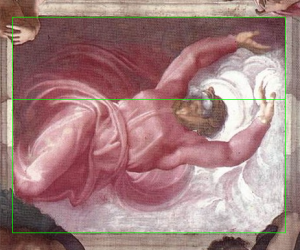 God divides the light from the darkness

Golden Ratios in the positions of the subjects within the paintings

Admittedly, the more you look at the detailed elements of any painting, the more chance you have of finding some golden ratios. These examples, however, use the primary elements of the composition. The best evidence is the many obvious examples of its use based solely on the height and width of the paintings. These demonstrate that Michelangelo’s use of the Divine proportion was quite deliberate and intentional.

Golden Ratios in the proportions of the paintings to the frames

The green lines in the three large images below illustrate the application of this concept. The red arrows show the second golden ratio point in relation to the width of the framed area. Click on any image for full resolution.

The last two paintings of the biblical narrative, on the left side in this image, are close to these same golden ratios but do not use it so precisely as the others.

Golden Rectangles in the Ceiling Paintings

In addition to the above evidence, the dimensions of two of the five small paintings inset on the ceiling approximate Golden Rectangles with an accuracy of 1/100th. This is shown by the green rectangles: 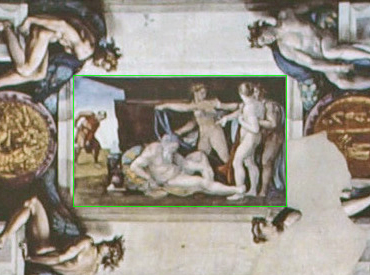 “The Drunkenness of Noah” – Aspect Ratio of 1.6 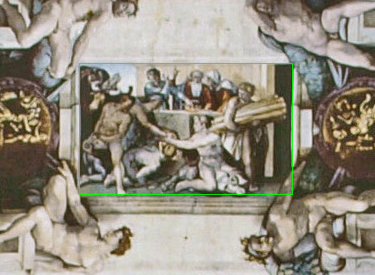 The Sacrifice of Noah – Aspect Ratio of 1.6

Also, the positions of the numerous human figures sitting along the opposite sides of the ceiling are based on the golden ratio of the width of the center section of the ceiling. 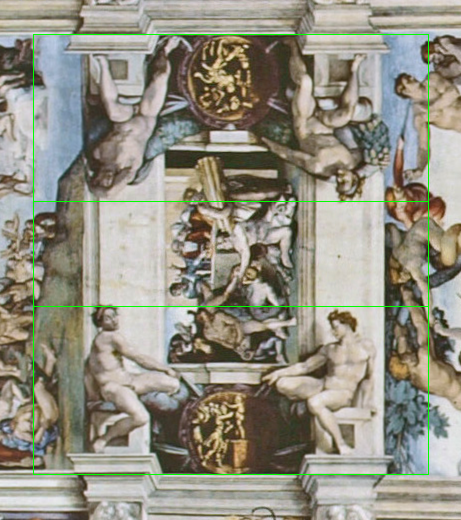 The tablets of the ancestors of Jesus are Golden Rectangles

If there remains any doubt that Michelangelo used the Divine Proportion, look to the paintings of the tablets listing the ancestors of Jesus on the side walls of the Chapel. The height to width of the name plates form a golden rectangle, as shown in green in the images below. Most of the name plates are within a pixel or two of being golden rectangles. The average height to width ratio of of all the paintings is 1.62, accurate to within 1/1000th of the golden ratio of 1.618. Click on any image for full resolution.

Michelangelo was in concert with other Renaissance greats of Luca Pacioli, Leonardo da Vinci and others

Michelangelo painted the Sistine Chapel between 1508 and 1512. The book “The Divine Proportion” (De Divina Proportione), written by Luca Pacioli and illustrated by Leonardo da Vinci, was composed between 1496 and 1498, and first printed in 1509. Knowledge of the golden ratio clearly existed before Pacioli began to write the book. There’s evidence of this in the earlier paintings of Leonardo, Botticelli, Raphael and other Renaissance painters. Leonardo da Vinci used this Divine proportion in a number of his paintings, including The Annunciation in about 1473, The Last Supper in 1495 and Salvator Mundi around 1500.

Luca Pacioli, author of “De Divina Proportione,” begins the book with this introduction:

“A work necessary for all the clear-sighted and inquiring human minds, in which everyone who loves to study philosophy, perspective, painting, sculpture, architecture, music and other mathematical disciplines will find a very delicate, subtle and admirable teaching and will delight in diverse questions touching on a very secret science.”

Dr. Mario Livio, author of The Golden Ratio: The Story of Phi, the World’s Most Astonishing Number, describes “De Divina Proportion” (on pages 132-133) as follows:

“Pacioli raves ceaselessly about the properties of the Golden Ratio”

“there is no doubt that Pacioli had a great interest in the arts and that his intention in The Divine Proportion was partly to perfect their mathematical basis.”

“His opening statement on the book’s first page expresses his desire to reveal to artists, through the Golden Ratio, the “secret” of harmonic forms.”

“This union of art and mathematics is far from our own way of thinking, but it was fundamental to the Renaissance.”

The golden ratio, known then as the Divine proportion, was a highly regarded tool for artistic composition and expression in the Renaissance art. It was used by the masters of the Renaissance to bring both mathematical and visual harmony to the elements within a work of art. It was thought to embody an essence of the Divine. Consider these quotes of Michelangelo’s contemporaries:

“Without mathematics there is no art.” Luca Pacioli, author of “De Divina Proportione”

“Where the spirit does not work with the hand there is no art.” Leonardo da Vinci

Michelangelo’s painting of the Vatican’s Sistine Chapel had incredible religious significance. It really should be no surprise that Michelangelo would have used the Divine proportion extensively in the creation of this work. In retrospect, it would be much more of a surprise if he had not.

Design and Analysis by PhiMatrix software