You are here: Home / Life / Is the Nautilus shell spiral a golden spiral?

Nautilus shell spirals may have phi proportions, but not as you may have heard.

The Nautilus shell if often associated with the golden ratio. There is a fair amount of confusion, misinformation and controversy though over whether the graceful spiral curve of the nautilus shell is based on this golden proportion. Some say yes, but offer no proof at all. Some show examples of spirals, but incorrectly assume that every equi-angular spiral in nature is a golden spiral. Several university math professors say no, but they only compared the nautilus spiral to the spiral created from a golden rectangle. Another university professor says no, but only measured height and width of the entire shell. Let’s look at this objectively and solve this mystery and debate.

The Golden Spiral constructed from a Golden Rectangle is NOT a Nautilus Spiral.

A Golden Spiral created from a Golden Rectangle expands in dimension by the Golden Ratio with every quarter, or 90 degree, turn of the spiral. This can be constructed by starting with a golden rectangle with a height to width ratio of 1.618. The rectangle is then divided to create a square and a smaller golden rectangle. This process is repeated to arrive at a center point, as shown below:

The golden spiral is then constructed by creating an arc that touches the points at which each of these golden rectangles are divided into a square and a smaller golden rectangle.

Is there more than one way to create a golden spiral?

The center/vortex of the above spiral increases to a width of 1 at point A. The half rotation of 180 degrees to point B expands the width of the spiral to 1.618, the golden ratio. Continue another half turn of 180 degrees to point C to complete the full rotation of 360 degrees. The width of the spiral from the center is now 2.618, which is the golden ratio (phi) squared. The golden ratio lines in red indicate how another full rotation expands the length from the vortex by phi squared, from phi to phi cubed. And so the pattern of expansion continues. This Golden Spiral based on a 180 degree rotation is a much better fit to the Nautilus Spiral.

A golden mean gauge seems to match the spirals of some Nautilus shells, so is that the answer?

If you measure a Nautilus shell with a golden mean gauge, you may find that the gauge isn’t far off the distance from the inner spiral on one side of the center point to the outer spirals on the other side. 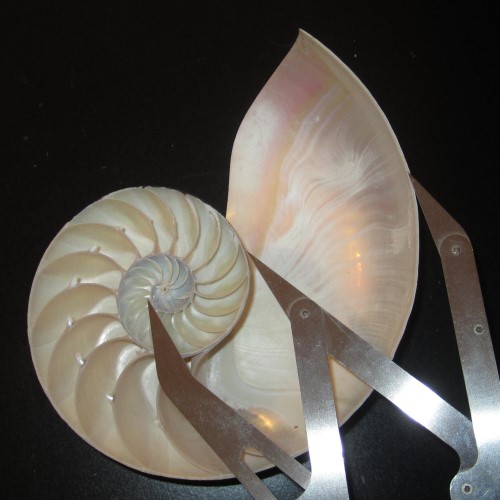 Does this explain its association with the golden ratio?  Let’s explore a little further.

Another spiral variation may relate the Nautilus spiral to phi

Let’s continue to explore that fit of a slightly different variation on a golden spiral. Rather than seeking a golden ratio from the spiral’s center point, let’s try measuring the dimensions and expansion rate formed by these three points:

As illustrated in the Nautilus shell below, the distance from Point 1 to Point 2 divided by the distance from Point 2 to Point 3 is quite close to a golden ratio for the complete rotation of the Nautilus spiral shown below.  This is indicated by the golden ratio ruler below, which has a golden ratio point at the division between the blue and white sections. When the blue section has a length of 1, the white section has a length of 1.618, for a total length of 2.618.

The two golden spirals we’ve identified then look like this:

Golden ratio to opposite spiral

The image below has the “golden ratio to opposite spiral” overlayed in red on a nautilus shell spiral. As you can see, the fit is fairly good for the first three full rotations from the center point. Beyond that point, this particular nautilus shell begins to show a slightly more gradual and open curve than this golden spiral. All in all though, its relationship to a golden ratio spiral is becoming more apparent.

Below is a photo of another nautilus shell. It has the same general pattern in that its spiral curve conforms fairly closely to a the “golden ratio to opposite spiral” for the first three rotations, but this one has a tighter curve than the golden ratio spiral in its final outward spiral.

Let’s take another look at the spirals of the Nautilus based on the center point. If we measure the actual dimensions of the above Nautilus shell, we find that its expansion rate with each rotation from its center point can be as low as 2.58.  This is slightly less than 2.618, Phi squared, as in the idealized golden spiral above. Expansion rates in this same shell ranged to 2.9. Rates over 3 were observed in other shells. Note how the expansion rate varies for any given Nautilus as you rotate the shell, as illustrated below: 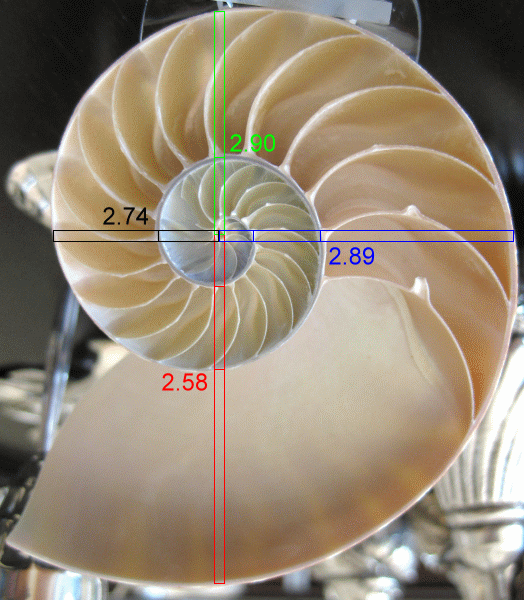 So, we see that not every nautilus spiral is created equal, nor is it created with complete perfection. Just as with the human form, nautilus shells have variations and imperfections in their shapes and the conformity of their dimensions an ideal spiral using either of the two methods shown here. So while many inaccurate claims have been made regarding both its existence and non-existence, we see that the Nautilus spiral can exhibit dimensions whose proportions come close to phi. You’d likely have to search quite a few beaches to find a Nautilus shell whose spiral fits any of these phi-based spirals perfectly, and may never find one.  We can see though that the visual appearance of dimensions come close to phi proportions, and understand why this has lead many people to associate it with the golden ratio, and to view it as one of the most beautiful spirals in nature.

So what do you think? Is the Nautilus spiral related to the golden ratio or not? Share your thoughts below.

See the Spirals page for more information on spirals in nature.

Following are comments by three Ph.D.s in mathematicians who say that the Nautilus has no relationship to the golden ratio. This is true with respect to the classic golden spiral, but misses the fact that there is more than one way to construct a spiral with golden ratio proportions.

The Man of Numbers – In search of Leonardo Fibonacci by Dr. Keith Devlin (page 64) – “Unfortunately, the belief that the Nautilus shell has the form of the Golden Spiral is another of those false beliefs about Euclid’s number. To be sure, the Nautilus shell is a spiral, and it is moderately close to spiraling by a constant angle, but that angle is not the Golden Ratio. Not even close. So there is no connection. And that is why this topic is tucked away at the end of this book!”

Replicator Constructions by Dr. George Hart – “My goal here was to comment on the common misconception that the nautilus has a golden ratio spiral. A real nautilus doesn’t. This is what a nautilus shell would look like if it were based on a golden spiral. I built it in halves on a raft, then glued the halves together. I’m quite happy with the final result.  There’s a video explaining more about it here.” 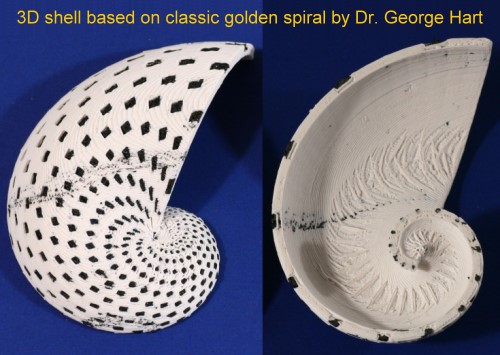 The Golden Ratio—A Contrary Viewpoint by Dr. Clement Falbo (page 127) – “The nautilus is deﬁnitely not in the shape of the golden ratio. Anyone with access to such a shell can see immediately that the ratio is somewhere round 4 to 3. In 1999, I measured shells of Nautilus pompilius, the chambered nautilus, in the collection at the California Academy of Sciences in San Francisco. The measurements were taken to the nearest millimeter, which gives them error bars of ±1 mm. The ratios ranged from 1.24 to 1.43, and the average was 1.33, not phi (which is approximately 1.618). Using Markowsky’s ±2% allowance forto be as small as 1.59, we see that 1.33 is quite far from this expanded value of phi. It seems highly unlikely that there exists any nautilus shell that is within 2% of the golden ratio, and even if one were to be found, I think it would be rare rather than typical.”

Note: A special thanks go to Oliver Brady for his astute analysis of this article, which led to improvements in its clarity and accuracy.