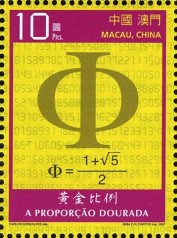 Governments around the world commemorate the Golden Ratio, Phi and Fibonacci sequence.

Stamp collecting is one of the world’s most popular educational hobbies, and is enjoyed by people of all ages and nationalities. The most popular stamp ever is US 1993 Elvis stamp, with over 124 million collected. So, the Golden Ratio and Fibonacci sequence may not compete with Elvis in popularity anytime soon, but they too have been recognized with commemorative stamps issued by governments around the world. In addition to adding some “phi” to “philately,” they offer some interesting expressions of golden ratio concepts, as well as its application in design.

The Principality of Liechtenstein, a landlocked micro-state bordered by Switzerland and Austria, issued a set of three stamps in 2013 that illustrate the Fibonacci sequence and its relationship to the golden ratio. 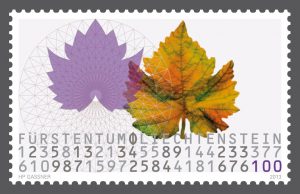 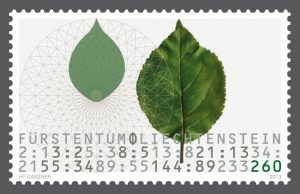 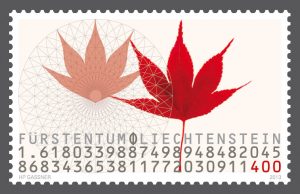 Note that interesting presentation of concepts:

Note: Click on the images on this page to see the full resolution images.

Interestingly, the designer very creatively applied the golden ratio in the design of the stamps as well. This is shown in the grid overlays created with PhiMatrix software. 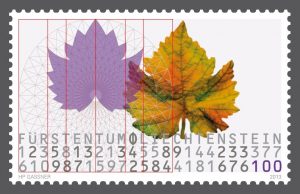 All in all, a rather very creative and thoughtful expression of the golden ratio and its application in design.

Macao China in 2007 issued a two sheet series called “Ciência E Tecnologia- A Proporção Dourada,” or “Science and Technology – The Golden Proportion.” Macau, spelled Macao in English, is officially the Macao Special Administrative Region of the People’s Republic of China. It’s an autonomous territory in East Asia, bordered by the city of Zhuhai in China and the Pearl River Estuary. 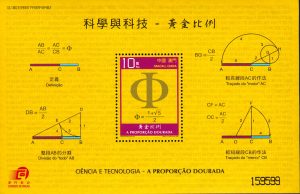 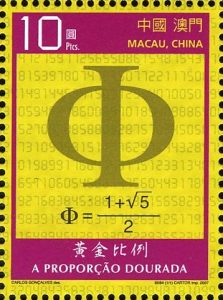 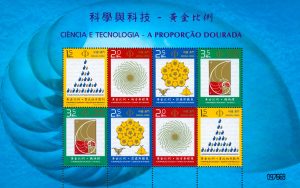 The sheet with four stamps shows:

Here too the designer used the golden ratio in the design of the stamp itself:

The stamp features Leonardo da Vinci’s famous illustration Vitruvian Man, which is based on the mathematical proportions of human design by Vitruvius.

While it covers aspects of mathematics beyond the golden ratio, it includes: 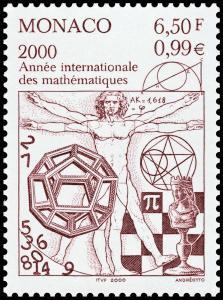 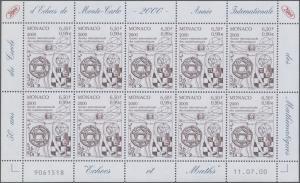 It appears that the stamp designer, Claude Andréotto, may have used the golden ratio in several aspects of his composition of the stamps: 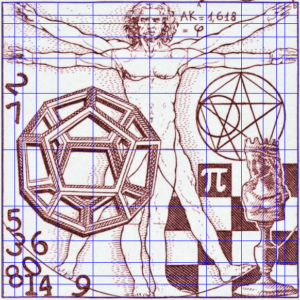 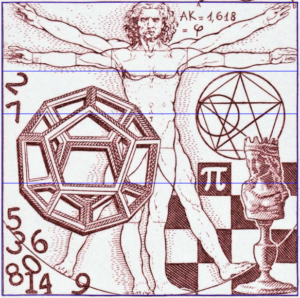 Italy issued a 750-lira postage stamp in 1994 to commemorate the 500th anniversary of the publication of Luca Pacioli’s Summa de Arithmetica. The inscription on the stamp “Della Summa de arithmetica, geometria, proportioni et proportionalita” means “The Summary of arithmetic, geometry, proportions and proportionality.” This book on mathematics was written by Luca Pacioli and first published in 1494. It contains a comprehensive summary of Renaissance mathematics, including practical arithmetic, basic algebra, basic geometry and accounting. Pacioli continued his work in this area with a study of the golden ratio in his publication of “De Divina Proportione”, or “The Divine Proportion” in 1509. While this stamp specifically relates to Pacioli rather than the Divine Proportion itself, it references his earlier work on proportions and proportionality. 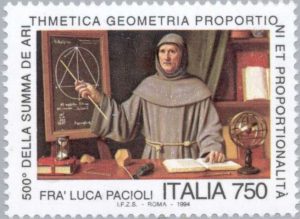 The Republic of San Marino, an enclaved microstate surrounded by Italy, issued a sheet of stamps in 1992 commemorating the life of Piero della Francesca. Much of his work was later absorbed into the writing of others, notably Luca Pacioli. Piero’s work on solid geometry appears in Pacioli’s “De Divina Proportione”, which has illustrations by Leonardo da Vinci. This work is recognized in the middle stamp of the set, which is captioned “de Divina Proportione”:

Switzerland issued a stamp in 1987 to commemorate the 150th anniversary of the Swiss Society of Engineers and Architects. 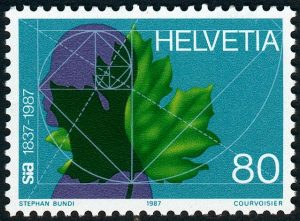 It includes references to:

The Commonwealth of Dominica, is a sovereign island country and part of the Windward islands in the Lesser Antilles archipelago of the Caribbean Sea. It issued a stamp in 1986 to commemorate Leonardo Fibonacci, with the Greek letter Phi representing the golden ratio. 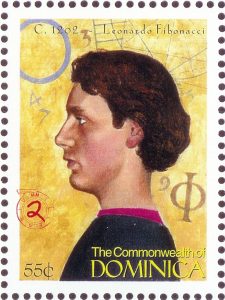 Japan issued the “Golden Ratio Centenary of the Architecture” stamp in 1986 to commemorate the 100 year anniversary of the founding of Architectural Institute of Japan. It too recognized the relationship of the golden ratio to design. It did so with its illustration of the classic construction of a golden ratio using an arc swung from the midpoint of a square. 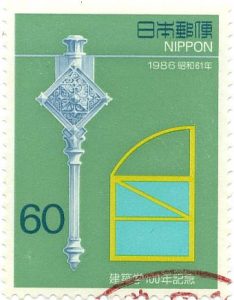 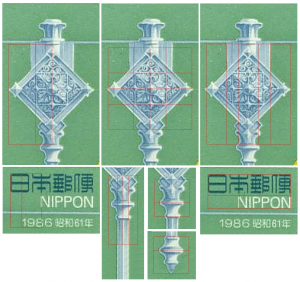 In 2004, the non-existent nation of Nichtsburg & Zilchstadt issued a stamp bearing the image of Leonardo Fibonacci. This falls in the realm of fantasy issues, also referred to as “Cinderellas.” This stamp was included in a set of four stamps on mathematics that were created by Inzander Berenku, of Occussi-Ambeno’s Imperial Government Printing Office (KDPN). “Nicht” and “Zilch” mean “nothing,” so it was quite appropriate that the stamps commemorated mathematicians who advanced the concept of zero, or nothing. The 30 Midenika stamp honors Leonardo Pisano Fibonacci. Fibonacci brought nothing, or zero more precisely, to Western Europe from the Arabian world. Their decimal place-value numeral system quickly replaced the Roman numeral system. The “Midenika” is the plural of Miden, the modern Greek word for “zero”, and is a fictitious monetary unit. That’s a whole lot of nothing, isn’t it! 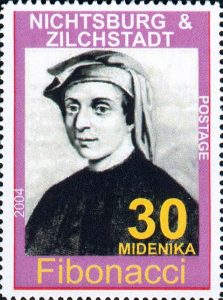 What about the United States Postal Service and other major countries?

You may have noticed that the world’s largest countries are absent from the list of those commemorating the golden ratio in their postage stamps. In fact, some of the countries that issued commemorative stamps are among the very smallest in the world, and one is even non-existent. Perhaps that’s because these small countries do not have their own rock stars, movie stars and super heroes to honor with a stamp. Yes, perhaps that’s the reason. On the other hand, maybe the pop-icon cultures of major countries just keep them from fully appreciating the finer things in life, like the golden ratio, that are truly timeless in their beauty and impact!

25 most popular stamps in the US

With a few exceptions, there’s a striking contrast in the subjects of stamps that are the most popular in American culture. Here’s the list of the 25 most collected stamps issued by the United States Post Office:

So how can we get more mathematically-oriented subjects on stamps? The Postal Service receives suggestions for new stamps from about 50,000 people every year. Only 20 to 25 of those make the cut. This selection is made by the Postmaster General’s Citizens’ Stamp Advisory Committee, which includes designers, historians and academics. They review the submissions and make their recommendations to the Postmaster General for final approval.

So there’s a lot of competition, but if you’d like to recommend that the Golden Ratio and Fibonacci series be recognized with a commemorative stamp in the good old USA, the Postal Service encourages those with ideas for new stamps to submit their suggestions in writing to:

Every ten years there is an international celebration of stamp collecting at the World Stamp Show, which was hosted in 2016 in New York City. The show is attended by stamp collectors, dealers, exhibitors, postal administrations and other societies from around the world. There they sell, buy and discuss all aspects of this hobby, which is known as philately. Maybe if enough of you reading this article write to the Postmaster General, we’ll see some more golden ratio commemorative stamps on display at the next show.

Create or purchase your own custom USPS postage stamps!

For those of you who just can’t wait that long or take the competition, there is still another option. You can create and order your very own custom US postage stamps at Zazzle.com. They’ve already created some beautiful Golden Ratio Stamps, and Fibonacci Stamps, including some of those shown here:

If you know of any Golden Ratio, Phi or Fibonacci stamps that weren’t covered in this article, please let me know and I’ll include them, with a credit to you. Send your submissions via the Contact page.

http://jeff560.tripod.com/stamps.html – Stamps on mathematicians and mathematics.