You are here: Home / Blog / “The Golden Ratio” book – Author interview with Gary B. Meisner on New Books in Architecture

Gary B. Meisner, author of the website GoldenNumber.net and developer of PhiMatrix software, did an interview on the New Books Network (NBN) for his 2018 book, “The Golden Ratio – The Divine Beauty of Mathematics.” 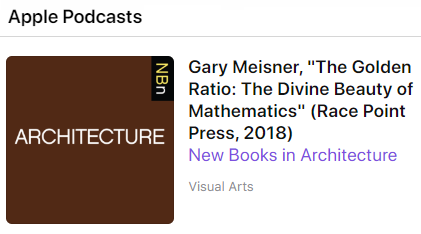 To listen to the podcast, click on the image above or the links below:

The interview was conducted by Tricia Keffer, as host for NBN’s Architecture Podcast. The podcast aired on November 23, 2019. Coincidentally, this is celebrated by some as Fibonacci Day as the date 11/23 corresponds to the first digits in the Fibonacci sequence of 1, 1, 2, 3. (Some references start with zero). NBN is in the top 2% of podcast downloads.

Questions that Tricia posed in the interview included:

The interview was fast-paced and engaging, and its 40 minute duration allowed for a deep dive into some of the topics, especially as it related to where the golden ratio appears in architecture and how it can be applied by architects, and anyone else in the design arts.

Classic applications of the golden ratio include some of the most notable buildings in the world, including the Parthenon, the Taj Mahal and the UN Secretariat Building. It was even used in the futuristic design of Star Trek’s USS Enterprise.

One of the key takeaways, for architects or for anyone in the design arts, is that any design or composition they create involves many decisions on position and proportion. The golden ratio, with its unique mathematical properties and inherent harmony of proportions, provides a tool like no other to incorporate visual harmonies into all aspects of their designs.

As Meisner pointed out in the interview, using the golden ratio may seem somewhat limiting at first, but it’s really not. Consider that just 12 notes of the musical scale have been used to create limitless songs and styles of music. Yes, there are many other frequencies that could be used, but what can be created from those 12 notes is limited only by your creativity, and all the music ever composed with the Western musical scale is in harmony with that design, and thus inherently familiar to the ear. The same is true of the golden ratio. It can be applied to every decision being made on position and proportion, and the creative results are truly unlimited. This makes it far better than the “Rule of Thirds,” which is a simple way to approximate the golden ratio, but that lacks many of its benefits.

Meisner also discussed the historical applications of the golden ratio in architecture, its appearances in nature, and a number of topics that are most subject to confusion and debate.

Tricia shared that her professor, Dr. Chang, learned about the golden ratio and its applications from his art training at the Beau Arts School in Paris. His hero was Leonardo da Vinci. While he now has a golden mean caliper, he had learn it first by doing geometric constructions with a string. Tricia intends to use the golden ratio in her career in landscape architecture, which is certainly another great application for it use.