You are here: Home / Face/Beauty / The Human Face and the Golden Ratio

The human face is based on Phi and Golden Ratio proportions.

The human face abounds with examples of the Golden Ratio, also known as the Golden Section or Divine Proportion.  We’ll use a succession of golden ratios to create a golden ruler to understand design in the face:

The head forms a golden rectangle with the eyes at its midpoint. The mouth and nose are each placed at golden sections of the distance between the eyes and the bottom of the chin. The beauty unfolds as you look further.

Even when viewed from the side, the human head illustrates the Divine Proportion.The first golden section (blue) from the front of the head defines the position of the ear opening. The successive golden sections define the neck (yellow), the back of the eye (green) and the front of the eye and back of the nose and mouth (magenta).  The dimensions of the face from top to bottom also exhibit the Divine Proportion, in the positions of the eye brow (blue), nose (yellow) and mouth (green and magenta).

Human beauty is based on the Divine Proportion

See the photo below which illustrates the following golden ratio proportions in the human face:

The photo below is from a 2009 University study on perceptions of attractiveness, and also illustrates a variety of golden ratio proportions in the images chosen as most attractive by study participants:

In the photo below, note the following golden ratio proportions that appear throughout the human face using the golden ruler above. 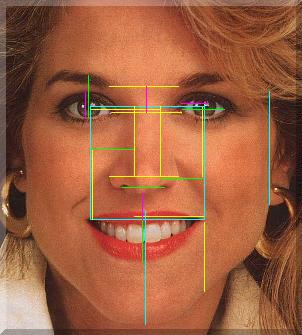 You get an actual measure of golden ratio proportion and beauty using the golden ratio face calculator that is included in PhiMatrix golden ratio design software: 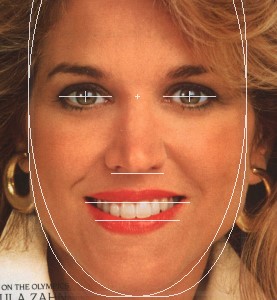 PhiMatrix provides transparent grids that can be applied to any image in any other software.  In the golden ratio face grid shown above, it uses phi, or golden ratio proportions to identify the key dimensions of the human face.  It has a free two week trial and is available for Windows and Mac.

Note that the PhiMatrix golden ratio circles grid can be used to identify golden ratio proportions in the human eye:

Even the dimensions of our teeth are based on phi

Variations and other factors in beauty

Even with a perfectly proportioned face though, there are endless variations in coloring and the shapes within this fundamental facial structure found in the Marquardt Beauty Mask. Variations in each facial feature (eyes, eyebrows, lips, nose, etc.) give rise to the distinctive appearance of each race and provide for endless variations in beauty that are as unique as each individual. The human face also communicates an incredible array of emotions which are an integral element of one’s total beauty.  The human face creates more phi elements in its appearance when we smile.  You’ll be perceived as more beautiful with a warm smile than with a cold-hearted look of anger, arrogance or contempt.

Interestingly, symmetry in the face does not necessarily equate to beauty.  Many, if not most, faces that are perceived as beautiful are usually not even close to being perfect in symmetry of the left and right sides.  Perfect symmetry tends to result in a face that appears unnatural, animated or robot-like.

Other factors influence perceptions of beauty as well, including skin tone, health and age.

More importantly, the application of the golden ratio to beauty refers only to physical beauty, and that is only one element of what defines true beauty in humans.  The saying “beauty is only skin deep” reflects this.  Physical beauty is fleeting and passes with time.  Other qualities of the mind and soul are the substance of true beauty.  These include love, joy, peace, patience, kindness, goodness, faithfulness, gentleness and self-control, to quote from the Bible in Galatians 5:22-23.  Our inner beauty is reflected in many ways, through our creative works, expressions of thought, compassion, friendship and acts of service  for others.  So while Hollywood and fashion magazines may trumpet physical beauty, true beauty in the human experience and the things that lead us to love and be loved are found in a beauty that runs much deeper, and that ultimately impacts physical beauty as well.

See also the page on Facial Beauty and the New Golden Ratio and the site at BeautyCheck.de.