You are here: Home / Markets / Stock Market Analysis, Phi and the Fibonacci Sequence

Human expectations occur in a ratio that approaches Phi.

Changes in stock prices largely reflect human opinions, valuations and expectations. A study by mathematical psychologist Vladimir Lefebvre demonstrated that humans exhibit positive and negative evaluations of the opinions they hold in a ratio that approaches phi, with 61.8% positive and 38.2% negative.

Phi and Fibonacci numbers are used to predict stocks

Phi (1.618), the Golden Mean and the numbers of the Fibonacci series (0, 1, 1, 2, 3, 5, 8, …) have been used with great success to analyze and predict stock market moves, known as retracements. Forbes ASAP featured a story on the work of scientist Stephen Wolfram in cellular automata (underlying rules that determine seemingly random phenomenon) stating “This seashell may hold the secret of stock market behavior, computers that think and the future of science.”

Markets may be as geometrically perfect as a spider’s web

Ermanometry Research shows the markets to be perfectly patterned, explaining that humans, being part of nature, create perfect geometric relationships in their behaviors, not unlike a spider spinning a geometrically perfect web with no conscious awareness of its amazing feat. Ermanometry applies the logarithmic spirals found in sea shells with dynamic ratios in 3D to relate one market move to others.

The golden ratio, or phi, appears frequently enough in the timing of highs and lows and price resistance points that adding this tool to technical analysis of the markets may help to identify fibonacci retracements, the key turning points in price movements. The photos below illustrate how the Golden Mean Gauge and Phi-based analysis software (PhiMatrix) can be used to identify these turns in the market. The middle arm of the gauge keeps the phi point of the outer arms as the gauge is opened and closed. The lines of the phi-based software are all in phi relationship to one another. The ratios of Fibonacci numbers, commonly used in technical market analysis, converge on phi as explained on the Fibonacci Series page.  Click on each photo to enlarge.

Fibonacci numbers were used by W.D Gann and R.N. Elliott, pioneers in technical analysis of the stock market.  In Elliott Wave Theory, all major market moves are described by a five-wave series, adding to the potential to identify the turns described above. The classic Elliott Waveseries consists of an initial wave up, a second wave down (often retracing 61.8% of the initial move up), then the third wave (usually the largest) up again, then another retracement, and finally the fifth wave, which would exhaust the movement. In addition, each of the major waves (1, 3, and 5) could themselves be separated into subwaves, and so on, and exhibit other Fibonacci relationships.A sample stock price wave analysis could look something like this:

For additional information on Elliott Wave Theory, its application and related concepts, please consult the resources below.

Beautiful Pictures – A gallery of simple, clear graphs that show how Elliott waves are in Fibonacci proportion to each other in time and price back to 1932.  Click HERE to order. 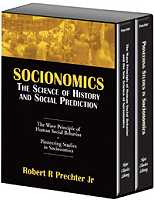 Socionomics: The Science of History and Social Prediction – Illustrates the historical correlation between patterned shifts in social mood and their most sensitive register, the stock market. It also includes essays, based on over 20 years of research, that correlates social mood trends to music, sports, corporate culture, peace, war and macroeconomic trends.  Click HERE to order.

How to Forecast Gold & Silver Using the Wave Principle – Robert Prechter’s work in publishing specific gold and silver forecasts for 22 years during one of the metals’ most historically baffling periods and his correct calling of nearly every major turn and trend during that time.  The years in question ran from 1979-2001, a period book-ended by gold’s $850 all-time high in 1980, and its low near $250 in 2001. “How to Forecast Gold and Silver” will shows what matters and what doesn’t when you want to invest in precious metals, looking in one place to predict where precious metals would go: to those markets themselves, and how to do it right.

Note:  The above information is presented for educational purposes.  No express or implied warranty is given as to the results that will be achieved by its application and no responsibility is accepted for financial decisions based on this information.
U.S. Government Required Disclaimer – Trading of any security in any market potential rewards, but also potential risks. You must be aware of the risks and be willing to accept them in order to invest in the markets. Don’t trade with money you can’t afford to lose. This is neither a solicitation nor an offer to buy/sell futures, stocks or options. No representation is being made that any account will or is likely to achieve profits or losses similar to those discussed on this web site. The past performance of any trading system or methodology is not necessarily indicative of future results. No guarantee is made that you will be able to replicate the same results.