You are here: Home / Cosmology / Golden Ratio Point of the Earth

Is there a Golden Ratio point of the Earth?

It has been claimed that the Golden Ratio of the Earth is in Mecca.  (See archived website or video on  Vimeo or YouTube.)  Is this true?

Update January 6, 2021: With comments provided by site visitors, I am providing this updated information on Mecca’s latitude:

The city of Mecca, however is over 20 kilometers from its northern border to its southern border. As noted above, the exact golden ratio point is 111.246…, or 21.246… degrees from the equator. The latitude of Mecca’s northern most border is 21.592 degrees, and the latitude of Mecca’s southern-most border is 21.278 degrees. That means that the exact golden ratio based on latitudes between the north and south poles still falls just barely south of the city limits of Mecca.

Site visitors did alternate measures based on the miles shown by Google Earth from the North Pole to Mecca to the South Pole, submitting that the golden ratio point falls within the boundaries of Islam’s holy city. They found the North-South distance to be 19980 kilometers, and divided by 1.618034 to arrive at a distance of 7,631.68, which they said was within Mecca’s city limits.

It became clear in this process that measures of the Earth’s surface are done by various methods, with factors that make them subject to some variability.

Site visitors also noted that the latitude coordinates of Kaaba is 21 degrees and 25 minutes, and that the first time the word “Kaaba” appears in the Quran is 2:125. Additionally,  the first verse in the Quran that has the word “Makkah” (Mecca) is exactly proportioned according to the golden mean. The word “Bakkah”, has a ratio of 1.618, when the letters of this verse are counted and divided by 1.618. (47/1.618=29; there are 29 letters from the beginning of this verse till the word Makkah). Lastly, the dimensions of Kaaba also embody the golden ratio, with its 21.2 meter length by 13.1 meter width (taking the original Hatim region into account), and 21.2/13.1= 1.618.

So as to the claim, the golden ratio point of the Earth between the North and South poles does indeed fall within the city limits of Mecca based on the mileage distances shown by Google Earth, and there are interesting references to Kaaba and Mecca in the Quran that relate to its latitude and to the golden ratio.

Latitudes have a clear reference point of origin that is determined by the poles defined by the Earth’s axis of rotation.  Selecting the origin point of the longitudes is not as clear as there is no single definitive reference point.  Those who claim Mecca as the Golden Ratio of point of the Earth’s longitudes base this on a Mercator projection of the Earth, to which a Golden Section has been overlaid using the PhiMatrix software available from this site:

One could start from any longitude to get to any location, but using a world projection is a reasonable approach.  The challenge though is that there are hundreds of different renditions of world projections that vary considerably.  Here’s an example of others that produce similar results:

The top image is the familiar Mercator projection.  The bottom  image is a Peters projection which eliminates the bias of the Mercator to highlight the Northern hemisphere.

Rather than use an image subject to interpretation to determine the golden ratio of the latitude, perhaps it is better to use actual longitude measurements.

The  image below shows the midpoint between Alaska and Russia.

The image below shows the resulting Golden Ratio points of longitude from the midpoint at left and also from the 180 degree meridian.  Click on either image to enlarge it. 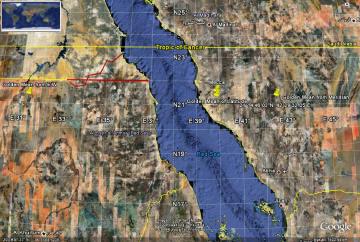 An alternate way to approach this is to start at the longitude of Mecca and move a Golden Ratio of 360 degrees away (222 degrees, 29 minutes and 32.05 seconds) to see where you land.  This point is at 117 degrees, 19 minutes and 21.37 seconds West, which is inside the border of Russia as shown below.  Click on the image to enlarge. 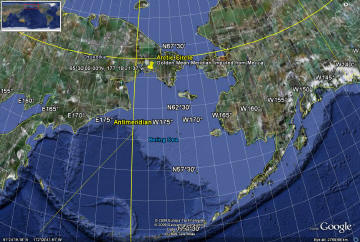 Is Mecca at the Golden Ratio point of the Earth?  The answer is subject to interpretation.  As one who believes in God though, the author says this:

If God exists (and I have unwavering faith He does) and wanted to make His existence known with absolute certainty He could do so in many ways.  The God I have come to know though Jesus Christ gives us a choice to accept Him, out of His love for us.  He gives us all the signs and evidence we need to sense His love and presence but always leaves enough margin for doubt so that we come to Him out of our own choice of faith and love, and not because there is no other alternative but to do so.  He loves us, and desires our love, but true love requires true choice.  He speaks to us in many ways, yet sometimes we decide to not grasp or accept the message, as noted in these scripture passages:

“The heavens declare the glory of God; the skies proclaim the work of his hands.   Day after day they pour forth speech; night after night they display knowledge.  There is no speech or language where their voice is not heard.  Their voice goes out into all the earth, their words to the ends of the world.” Psalms 19:1-4

“Though seeing, they do not see; though hearing, they do not hear or understand.  In them is fulfilled the prophecy of Isaiah:  ‘You will be ever hearing but never understanding; you will be ever seeing but never perceiving.  For this people’s heart has become calloused; they hardly hear with their ears, and they have closed their eyes. Otherwise they might see with their eyes, hear with their ears, understand with their hearts and turn, and I would heal them.’ But blessed are your eyes because they see, and your ears because they hear.”  Words of Jesus Christ in Matthew 13:13-16

So whether it be seeing phi in the beauty of the human form or the location of one’s holy place, may our eyes, ears, heart and mind be open to the message of our Creator and God.  Wherever the golden ratio point of the Earth may lie, these passages point to a deeper meaning yet in finding the place where our God would lead us to worship Him:

“Sir,” the woman said, “I can see that you are a prophet. Our fathers worshiped on this mountain, but you Jews claim that the place where we must worship is in Jerusalem.” Jesus declared, “Believe me, woman, a time is coming when you will worship the Father neither on this mountain nor in Jerusalem. You Samaritans worship what you do not know; we worship what we do know, for salvation is from the Jews. Yet a time is coming and has now come when the true worshipers will worship the Father in spirit and truth, for they are the kind of worshipers the Father seeks. God is spirit, and his worshipers must worship in spirit and in truth.” The woman said, “I know that Messiah” (called Christ) “is coming. When he comes, he will explain everything to us.”  Then Jesus declared, “I who speak to you am he.”  John 4:19-26

HolyMysteries.com archived website (The site is no longer active.)