Since my first investigation of human facial proportions in 1997, it seemed clear that the most important features that define a human face are the simplest and most obvious: An oval head and the positions and dimensions of the eyes and the mouth. As evidence, consider the “smiley face.” It expresses a variety of facial expressions with nothing more than a circular head, two eyes and a mouth line:

We immediately recognize this icon as a face, but it clearly does not represent the proportions of a human face.

Let’s instead express these same facial markers with normal human proportions, and with the simplest possible representation. This requires a vertical oval, two lines for the eyes and a line for the mouth. The resulting face will look something more like this:

This simple facial configuration is easily mapped to very natural human proportions with the use of four simple golden ratio proportions:

Eyes to mouth to chin

Inner eye to outer eye to side of face

The next important human facial feature is the nose, most simply represented by two nostrils. These too can be mapped to very natural human proportions with golden ratio lines:

This basic set of facial markers has been identified and validated through my analysis of hundreds of faces. They provide a very simple and logical set of the points that are required to construct the most basic features of a human face. They identify common golden ratio proportions that can be found in many attractive human faces.

Every face is unique though, even very beautiful ones, so few faces embody every one of these these proportions exactly. Even so, I recommend these markers and ratios to researchers for their use in assessing the appearance and validity of golden ratios in studies of facial analysis and attractiveness. There are a number of additional golden ratios that can also be found in many faces, but some are not as clear and universal as these. 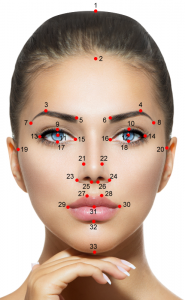 Of these 33 markers, 28 are 14 sets of symmetrical markers that appear on both sides of the face. Five other markers are on the vertical center line of the face and define proportions based on horizontal measures.

Most faces regarded as beautiful or attractive will have a significant number of markers whose proportions are very close to the golden ratio (as rounded to 1.618). The guide is simple when viewed in the individual elements shown in the slides above. It includes the following list of golden ratio facial proportions:

Why are golden ratios in the human face often missed by researchers?

A number of studies over the years have sought to determine whether golden ratio proportions exist in human facial features. Many have concluded that golden ratios do not exist, or have only a very limited presence. My review of these studies invariably reveals that the researchers simply missed the most basic golden ratios. This happened because they were measuring a different set of facial markers, and calculating a variety of alternative ratios.

As an example, one study by Italian researchers titled “The role of the golden proportion in the evaluation of facial aesthetics” captured over 30 facial markers using a very sophisticated imaging technology called 3D stereophotogrammetry (see below left). Of these, they used data on 14 facial markers for a study on attractiveness, from which they calculated 10 facial ratios (see below right). 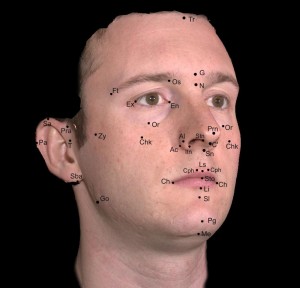 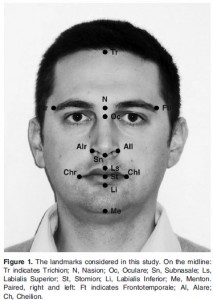 Note how different their markers and ratios are from those in the Meisner Beauty Guide: 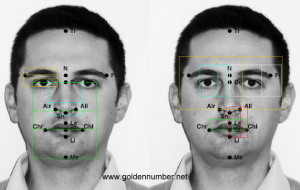 The importance of facial width in attractiveness measures is illustrated by the image below. The only facial marker changed is the width of the face, and the impact on attractiveness is significant. 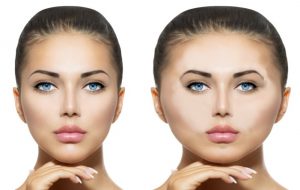 A 2009 study by US researchers titled “New “Golden” Ratios for Facial Beauty” made a very simplistic and invalid assumption that facial attractiveness can be reduced to one horizontal facial ratio and one vertical ratio. They announced these as the “new golden ratios” of facial attractiveness and said that true golden ratio was nowhere to be found.

The researchers properly identified the pupils to lip line as an important measure, but ignored its position on the face in relationship to the chin. Instead, they simply calculated the ratio as this dimension divided by the distance of hairline to the bottom of the chin. The importance of the relative positions of the eyes and mouth, and not just their dimensions, is illustrated in the photo below. The only change is that the eyes and mouth were both shifted downward by 20 pixels. Again, the impact on attractiveness is significant. 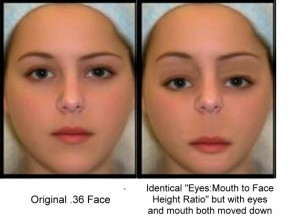 Horizontally, the researchers properly identified the pupils and face width as an important marker. The ratio they calculated, however, ignored the inner and outer positions of the eyes. As a result, they didn’t realize that their “new” ratio was simply a mathematical derivative of the eye width to face width golden ratio included in the Meisner Beauty Guide. The ideal face in fact embodied a number of golden ratio proportions in both its horizontal and vertical dimensions:

With this simplistic analysis based on a single female face of just average attractiveness, the researchers then made bold claims about the shortcomings in the attractiveness of famous women regarded as beautiful by most people, including Angelina Jolie, Elizabeth Hurley and Shania Twain. A more rational and valid approach would have been to start with faces that are considered beautiful and to identify a system that describes the common characteristics.

There are clearly many dozens of places on a human face that could be identified as a marker, and hundreds of ratios that can be calculated between these points. The availability of hundreds of facial ratios that do not equal the golden ratio does not mean that golden ratios do not exist. It just means that some of the most basic facial markers and simplest ratios were not included in their analysis. Many researchers apparently do not have simple gauges or software that makes identification of golden ratios easy. I urge researchers to include the Meisner Beauty Guide facial markers in the analysis of their data.

Why would the golden ratio appear in the human face?

Some have asked why golden ratios would appear in the human faces. It’s a good question. An equally appropriate question is to ask is why it would not. We find the golden ratio and the related Fibonacci series in a variety of diverse places in nature. It appears in the basic spirals of pine cones and seed pods. It is found in the spatial structure of molecules. It is even being found in quantum physics. If one is open to a spiritual perspective, the answer could be that humans were created by a superior intelligence who used the golden ratio as a constant to assure the harmony and beauty throughout the face, and in many other places in life. That answer is obviously unsatisfactory to those want a scientific explanation, and I think there is a logical answer to be found as well.

The work of Dr. Stephen Wolfram provides an insight into how individual cells are programmed to create the trillions of cells that comprise a living organism. Cellular automata proposes that a collection of cells creates a shape or design through a number of discrete time steps according to a set of rules based on the states of neighboring cells.

Consider the multitude of steps that must be required for embryonic cells to create the face of a human being through its entire growth cycle. Each cell must contain a set of rules which tells it what type of cell to become and the exact position on the face for it to appear.

Now consider that the unique mathematical properties of the golden ratio make it inherent in so many mathematical formulas and limits, as well as in many geometric constructions.

Imagine that YOU were the programmer who had to come up the rules to create the dimensions and proportions of the human face. Imagine that YOU have to choose ratios to create a facial design structure with complexity in concept, yet simplicity and harmony in execution. Would you choose a ratio like the golden ratio, with its unique mathematical ability to create a variety of different geometries? Or would you go about this by choosing a different ratio for every aspect of your design? Beauty may exist for its own sake or as an evolutionary adaptation to indicate a healthy partner for procreation. Either way, which approach do you think would result in the most aesthetically pleasing result, the use of a single ratio or different ratios for each element in the design of a face?

The Golden Ratio as the simplest and most logical solution

Our design as humans may be the result of something of higher intelligence creating a life form that is just a reflection of itself. On the other hand, it may be the evolution of individual cells uniting to create something with far more intelligence than themselves. In either case, I would submit that the golden ratio to be a more logical and likely basis for facial configurations than the use of dozens or hundreds of other independent ratios to create a face. Those in the academic community often steer away from the golden ratio because of their naturalist or humanistic leanings, and its connotation as being part of a “sacred geometry.” Its ability, however, to provide the simplest mechanism and explanation for facial dimensions should be embraced, not ignored, if we want to gain the best understanding of the dynamics at work at the cellular level in creating that wondrous face that you see every day in the mirror.

Further support of the appearance of the golden ratio in human facial proportions is found in the work of Dr. Stephen Marquardt. The Meisner method above provides a simple way to illustrate a number of basic golden ratio proportions commonly found in the human face. It does not, however, prescribe the specific configuration of the positions and proportions facial features that create the perception of beauty.

By contrast, Dr. Marquardt’s work led to his development of his “Marquardt Beauty Mask,” a system based on a complex of numerous golden ratio based decagons that create a template or archetype for the human face. Through his research, Dr. Marquardt demonstrated that a single facial template could define human perceptions of beauty across era, race and culture. Learn more about his work on this site at “Facial Analysis and the Marquardt Beauty Mask” or in much more depth at his site at BeautyAnalysis. com.