You are here: Home / Geometry / Phi and Geometry

Phi (Φ) was described by Johannes Kepler as one of the “two great treasures of geometry.” (The other is the Theorem of Pythagoras.)

Insert an equilateral triangle inside a circle, add a line at the midpoint of the two sides and extend that line to the circle.  The ratio of AG to AB is Phi.

Insert a square inside a semi-circle.  The ratio of AG to AB is Phi.

Insert a pentagon inside a circle.  Connect three of the five points to cut one line into three sections. The ratio of AG to AB is Phi.

When the basic phi relationships are used to create a right triangle, it forms the dimensions of the great pyramids of Egypt, with the geometry shown below creating an angle of 51.83 degrees, the cosine of which is phi, or 0.618.

A ruler and compass can be used to construct the “golden rectangle,” as shown by the animations below, which was used by the Greeks in the Parthenon.   (See also the Orthogons page.)

These same two constructions are shown in step-by-step view on Wikipedia:

Phi also defines other dimensions of a pentagon.

There are also a number of geometric constructions using a circle which produce phi relationships, as shown on the Geometric Construction of Phi in Circles page.

Phi can be related to Pi through trigonometric functions

Note: Above formulas expressed in radians, not degrees

Some interesting aspects of dodecahedrons and icosahedrons:

Learn more about phi and geometry on the Penrose Tiling and Quasi-crystals pages. 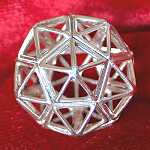