You are here: Home / Design/Art / Raphael and the Golden Ratio in Renaissance Art 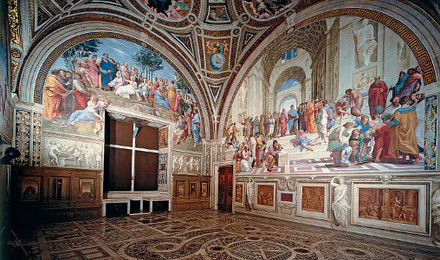 Raphael was one of three Master artists of the Renaissance

Raffaello Sanzio da Urbino, known as Raphael, was an Italian painter and architect of the High Renaissance and lived from 1483 to 1520. He is recognized as one of the three great masters of that period, accompanied by Michelangelo and Leonardo da Vinci. His work is admired for its form, composition, and visual achievement of the ideal of human grandeur.

One of his most famous works is The School of Athens, a fresco in the Apostolic Palace in the Vatican. It captures the spirit of the Renaissance, and is revered as his masterpiece. It was painted between 1509 and 1511.

The School of Athens: Inspired by a union of art and mathematics

It was also in 1509 that Luca Pacioli published the book De Divina Proportione (The Divine Proportion), with illustrations by Leonardo da Vinci. MonaLisa.org reports that The School of Athens “incorporates many of the mathematical theories of Luca and Leonardo.” “Civilisation” author Kenneth Clark is quoted there saying “This union of art and mathematics is far from our own way of thinking, but it was fundamental to the Renaissance.”

Raphael made his use of the Golden Ratio obvious

If there’s any doubt that Raphael used the Golden Ratio in this painting’s composition, it can be eliminated with a good degree of confidence by the golden rectangle that was placed front and center in the painting. It’s as though Raphael made a small but undeniable statement to answer the question before it was asked. This small rectangle is about 18″ by 11.1″ and is a rather unusual feature. Perhaps it once bore the title or some description of the painting. Even the framed area immediately below it shows a framed that is in golden ratio proportion to the borders on its sides. Click on the images for full resolution:

No other ratio would accomplish the same result in this composition

The painting has thousands of intricate lines, so some might say that finding golden ratios within it would be a simple exercise in pattern recognition. There are two ways to overcome that objection. You can test it for yourself by setting the Line Ratio in PhiMatrix (no cost trial) to any other ratio to see if you get the same abundance and consistency of results. Further, the golden ratios are very evident on the major elements of the composition alone. Note in the first image below (click to enlarge) that simple golden ratios of the width and height of the painting define the positions of the large wall of the first arch, the top of stairs at the floor and the top of the second arch. Other golden ratios define other key elements of the composition in the other images.

The intricate application of the golden ratio is brilliant

To appreciate the intricacy and depth of Raphael’s planning and application of the dimensional proportions in this painting, consider the illustration below. This image includes four rectangles that overlay the painting:

Trace the four rectangles separately, each in its own color, following it until you see the golden ratios that are revealed. It may be easiest to look first at the rectangles as overlayed onto a black background, also shown below. 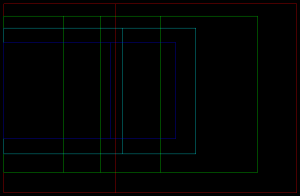 Raphael’s use of the golden ratio is not only clear and compelling, but quite brilliant in its execution. Do you agree? Your comments are welcome below.