You are here: Home / Blog / Renaissance Art Composition and the Ukranian Parliament Fight

The Divine Proportion of Renaissance Art is found in less than Divine circumstances.

A recent photo of a fight in the Ukranian Parliament is generating interest because its photographic composition reflects the Divine Proportion used by Renaissance artists, and many artists since. The classic composition of the photo was apparently first noticed by Manzil Lajura, who illustrated how the figures in the photo align with the golden spiral. Artist James Harvey then tweeted it on Twitter, giving it far more yet attention on the Internet.

The story was picked up by Mashable, The Guardian, Huffington Post and a number of other prominent news and content providers. I was pleased to see that they listed GoldenNumber’s art composition page as their reference source and included my illustration of Michelangelo’s “Creation of Adam” as their example of the Divine Proportion in Renaissance art.

The photo showed a Fibonacci spiral overlaying the Ukranian brawl. Three hands of those involved in the fight were nicely aligned with the primary dividing line at the golden ratio of its height of the photo. The head of one participant was near the focal point of the Fibonacci spiral. The head of another was placed at the end of its arc.The photo is well composed.

The Fibonacci spiral tells only part of the story as to why this photo is composed like a Renaissance painting. Artists of that time often applied the Divine Proportion, aka Golden Ratio, in numerous aspects of their paintings. They likely used a caliper or gauge similar in construction to the ones shown below, and not a golden spiral which happens to capture those same proportions. 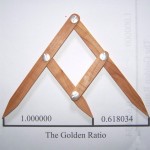 With closer examination, you’ll find that there are other golden ratio proportions within this photo that add to its excellence in composition. These include the following alignments with golden ratio lines:

Note that the two center lines vertically and horiztonally are golden ratios of the width and height of the photo. The lines on the outside of those lines are golden ratios from that point to the edge of the photo. All lines are precise to the pixel and were created with PhiMatrix Golden Ratio Design and Analysis software. Click on either image for the full resolution view. 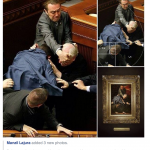 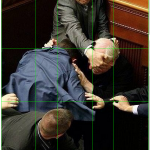 Fights in the Ukrainian parliament are not uncommon. In July, another fight began over a decree which would allow more reservists to be called to defend the country against Russian troops. We hope they keep up the good form in artistic styling even if their form in governing is somewhat lacking.