You are here: Home / Blog / Amen Break and the Golden Ratio in Music 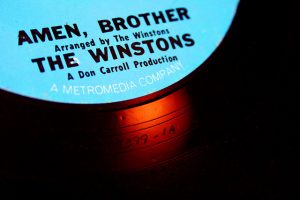 It’s one of the most popular drum loops in music history.

The “Amen break” is one of the most frequently used drum loop samples in music. It’s only four bars long. It only lasts about six or seven seconds. Even so, this short sampled loop has been used in well over a thousand songs in a wide variety of music, including hip hop, techno, breakbeat and digital. That’s pretty impressive, so why all the attention and air play? Could it be the golden ratio at work?

First, click on the link below to hear for yourself what everyone is talking about:

It was the B-side of a Grammy winning R&B single.

Here’s a bit of background. The solo comes from the song “Amen, Brother” by the Winstons, which included a short drum break performed by Gregory Sylvester “G. C.” Coleman. The song was released by Metromedia in 1969 on the B-side of the 45 RPM, 7-inch vinyl single “Color Him Father,” which won a Grammy for best R&B song the following year. It’s also now on several compilations and a 12-inch vinyl re-release album with other songs by The Winstons. The Winston’s version is an up-tempo instrumental rendition of Jester Hairston’s “Amen”, which was written for the 1963 movie “Lilies of the Field” with Sidney Poitier. This was then recorded by The Impressions in 1964.

Greater recognition came with the advent of sampling technology of in music.

The Amen Break drum solo gained greater fame and recognition yet in the 1980’s when sampling technology became popular, and more and more artists, perhaps over 1,500, sampled it to include in their own works. It’s often used as the base drum pattern, not necessarily as a drum solo break. It’s been found in the works of Led Zeppelin, David Bowie, Nine Inch Nails, Slipknot and even the theme song to Futurama, an animated sitcom.

But is it based on the Golden Ratio?

So what could make this short drum solo so immensely popular? Could the fascination with this short drum break be an example of the golden ratio breaking into the music scene? Michael Schneider, author of “A Beginner’s Guide To Constructing The Universe” says “yes” in his article “The Amen Break and the Golden Ratio.” Others, such as Sean Barrett, say no, in “The Amen Break does not involve the Golden Ratio” and that this is just another golden ratio myth to be debunked. Let’s investigate further to see if we can set the record straight.

Here is an image of the audio track from Wikipedia:

Michael Schneider points out in his article that there appears to be a golden ratio relationship in the this wave form. He shows that several of the peaks align quite closely to the golden ratio points of the length of the wave image: 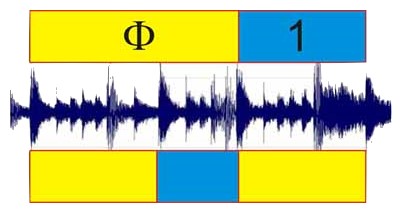 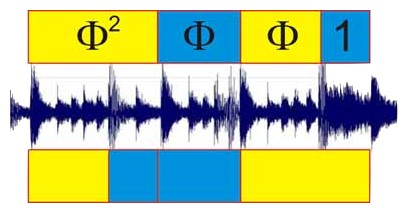 This alignment can be easily corroborated, using PhiMatrix software to overlay a golden ratio grid over a larger version of this wave image. The three dividing lines, starting from the right represent 0.618, 0.382 and 0.236. These numbers represent the reciprocals of Phi, Phi squared and Phi cubed. Each red line is thus a golden ratio of the one before it, and we see that the alignment is indeed quite close.

A musical perspective reveals the truth

Before jumping to any conclusion though, we also need to look at this wave image from a more musical perspective. Music is typically based on equal divisions of a measure into quarter, eighth and sixteenth notes. If we take the same starting and ending points on the wave image and use equal divisions we see this:

Now the picture looks a bit difference. We see that the equal divisions match up even more precisely yet with the numerous wave peaks. We also see that the sample we’re measuring for a golden ratio only contains 13 beats. Here then is what we find:

Any 13 beats in any song would have the same pattern

So while the spikes in the Amen break are “close” to the golden ratio, very close, it would be a mistake to assume that the golden ratio has something to do with the appeal of the sound, at least in the way described in Michael Schneider’s article. The article by Sean Barrett includes the wave image for a longer section of the song, which looks like this:

The grid in green shows all 16 bars of the Amen Break. As Sean Barrett notes, the wave image used by Michael Schneider from Wikipedia doesn’t include the first 3 beats. This allows the 13 beats to be broken down into Fibonacci number-based segments that approximate the golden ratio, but it makes little sense musically.

The musical notation for this drum solo also shows its rhythm to be based on standard 16th notes in a 2 4-bar measures:

The golden ratio appears in many places, but this is not one of them.

So in the end, the Amen break is a great little drum solo that led to “Amen, Brother” being the most sampled track in the history of music, but it’s safe to assume that it did so without relying on the golden ratio to get there. Can I get an Amen, Brother? 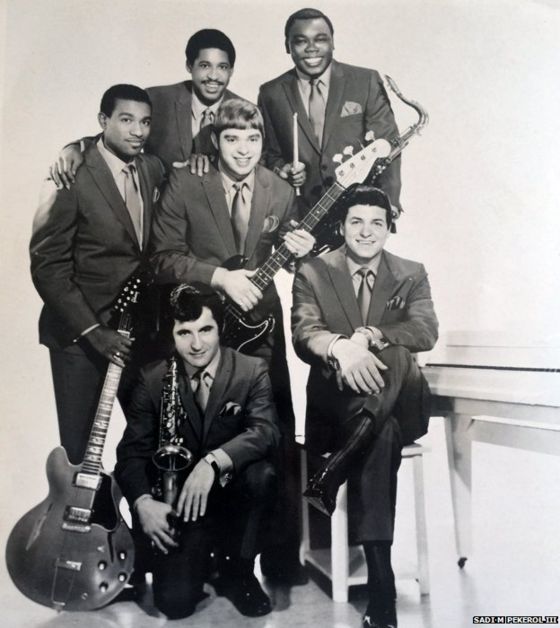 10 Things You Need To Know About: The Amen Break