You are here: Home / Design/Art / Botticelli, The Birth of Venus and the Golden Ratio in Art Composition

“The Birth of Venus”, painted by Sandro Botticelli between 1482 and 1485, is one of the most famous pieces of the 15th century Italian art.  It is based on Ovid’s Metamorphoses, a classic of Latin literature, and portrays Venus, the goddess of love, positioned between the Hora of spring, her handmaid, and Zephyros, god of the wind whose breath creates the blowing wind.  “The Birth of Venus” was created for the Medici family and resides at the Uffizi Gallery in Florence.

Did Botticelli know and apply the Golden Ratio?

Some question whether Botticelli knew and used the Golden Ratio (aka Phi, 1.618) in the composition of this painting.  If he did, it would be evidence of  earlier awareness and application of the Golden Ratio than when “De divina proportione” (The Divine Proportion) was written in Milan by Luca Pacioli in 1496-1498 and published in Venice in 1509, complete with illustrations by Leonardo Da Vinci.

The Dimensions of the Canvas are almost exactly a Golden Ratio

Can we determine if Botticelli used the Golden Ratio in his creation of this painting?  The first clue is found in the dimensions of the canvas itself.  The dimensions of the canvas is 172.5 cm × 278.5 cm (67.9 in × 109.6 in). The ratio of the width to the height (based on the more accurate measures in centimeters) is thus 1.6168, which is only a 0.08% variance from the Golden Ratio of 1.618.  To put that in perspective, for the canvas to have been an exact golden ratio of 1.6180339887…, the height of the canvas would need to be reduced by less than about 0.13 of a centimeter or 1/20 of an inch.  The width of the painting at 109.6 inches seems somewhat arbitrary at first glance, until you realize that the units of measure were not standardized in this era.  The Spanish foot or “pie” of the middle ages was 10.96 modern inches, which could indicate that the dimensions were not haphazard at all, but carefully planned to be exactly 10 “feet” wide.

The Dimensions of the Frame may be an exact Golden Ratio

And, consider this:  The Birth of Venus is the first work ever painted on a canvas in Tuscany.  If the thickness of the canvas were o.5 centimeters, the dimensions of the frame wrapped underneath the four sides of the canvas would have been 171.5 x 277.5, the ratio of which is … 1.618, the golden ratio.  Whether exact or not, the dimensions are so close that one might rather easily conclude from this that Botticelli’s intent here was to begin this great work of art with the perfection of a Golden Ratio.  After all, The Birth of Venus was a revolutionary work, created by Botticelli as a wedding present for a member of his patron family, the politically and financially powerful Medici family, for display above the marital bed as a celebration of love. The painting was so controversial that it remained behind closed doors for another fifty years.

Other Golden Ratios appear in key elements of the composition

Lines focusing on the navel:

Let’s look at the subject of the painting, Venus.  It’s said that her navel is also at the golden ratio point of the height of her body, and this is made clear in the illustration below. It’s possible to create a golden ratio point of her body with several reasonable variations, but they all cross exactly at her navel, and at the bottom of her elbow:

Other studies have identified other examples of the golden ratio in the painting, but even without these, the golden ratio proportions found in the dimensions of the canvas, the key elements and in Venus herself provide rather compelling evidence that Botticelli both understood and applied the golden ratio in his composition of The Birth of Venus.

Click on images below to see high resolution versions of the painting that shows these golden ratio points, precise to the pixel.

Variations on the navel

Golden Ratios in Botticelli’s renderings of The Annunciation

The Birth of Venus was completed in 1485. Botticelli created a number of paintings of the Annunciation between 1485 and 1490. This event clearly captures the meeting of the divine with the mortal, and an excellent opportunity to apply the Divine Proportion. Click on an image below to see how Botticelli appears to include intentional applications of the golden ratio in his compositions. Note that the golden ratio lines are based simply on height and width of the canvas in all but one base, so no creative interpretation of placement was required. 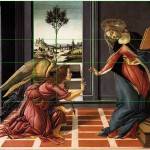 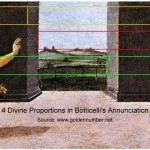 4 Divine Proportions revealed in The Annunciation 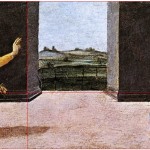 Golden ratios based on the width of the painting 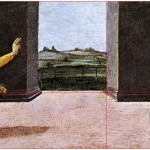 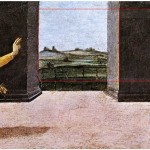 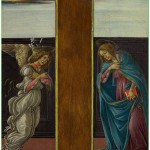 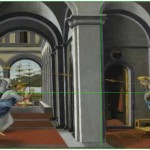 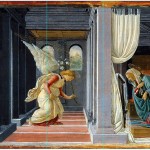 An earlier version in 1485. Used of golden ratios not as certain.

The Birth of Venus by Botticelli at Uffizi.org

The Birth of Venus and Phi YouTube video by Amor Sciendi

Medici, Godfathers of the Renaissance on PBS

Measurement in the Middle Ages