You are here: Home / Face/Beauty / Celebrity Faces and the Golden Ratio: The real story.

Do these celebrities owe their good looks to the Golden Ratio?

White lines show golden ratio proportions from pupils to nose tip to lip/teeth line to bottom of the chin.

When a joke becomes science, then science becomes a joke.

A designer in Russia morphed several celebrity faces as a joke, but it somehow morphed into “scientific evidence” in yet another attempt to debunk the golden ratio. This time it was on Wired.com, a major online magazine site. (Find article here.) Igor Kochmala created some fun images of celebrity faces that he morphed to fit nonsensical patterns of golden ratio spirals. His blog page, called “Yet-another-Fibonacci-homework,” humorously featured his “Dr. Fibonazi’s Plastic Surgery Clinic.” There he transformed five celebrity faces and the Mona Lisa to goofy looking images to supposedly “bring natural harmony” to their faces, as shown below. Click on any image for full resolution.

The blog post was picked up by dozens of online magazine sites. Smash.com described the images as “hilarious distortions.” DesignTaxi.com hailed it as “satirical.”

Every rumor about you is true? What a setback!

When the blog post was picked up by Wired.com though, the story changed. The article was titled “How Celebrity Faces Would Look if They Fit the Golden Ratio.” The celebrities were now “disfigured by the golden ratio.” The use of the golden ratio by Leonardo da Vinci and Salvador Dali was reduced to “art lore.” Its application by Le Corbusier in the design of the UN Secretariat Building was nothing more than “architecture mythology.” The author, Margaret Rhodes, concluded saying,

“Kochmala’s project is “only the most recent setback for the golden ratio, whose mythology was deconstructed in posts by Co.Design’s John Brownlee (find article here) and Stanford’s Keith Devlin (find article here). Both detail the folly in retroactively applying the golden ratio to existing works of art, and of leaning on the math as a means of making a design resonate with users. The lesson: There are no surefire formulas in beauty or good design.”

Really? If an artist intentionally applies the golden ratio then is it “folly” to study it retroactively, or maybe just a good way to learn something about art and design? Nature is filled with structures and patterns that are based on mathematics, so wouldn’t applying the same principles in design just be common sense? The lesson: Examine the evidence before believing what you read. Learn about art and design from artists and designers, not from online magazines seeking clicks with sensational articles and mathematicians who view the golden ratio as an infinitely precise theoretical construct with few possible real life applications.

Evidence and facts aren’t good click bait for traffic, but you deserve them anyway.

I’ve written an article that covers the many fallacies and misrepresentations in golden ratio article on FastcoDesign by John Brownlee (find article here). I’ve written another article the highlights many evidences of golden ratio applications that Devlin says simply do not exist. I’ve illustrated da Vinci’s intricate use of the golden ratio in Salvator Mundi, The Last Supper, The Annunciation and other paintings. I’ve shown how Le Corbusier rather brilliantly applied his golden ratio-based “Le Modulor” design philosophy to the Secretariat Building, even down to dimensions within the window frames.

So can the golden ratio also be found in the faces of the celebrities lampooned by Kochmala? I admit I’m no Ph.D. in Math. It’s been decades since I took college courses in quantitative analysis, differential equations, and statistics. I do seem to recall though that you’re supposed to look for some evidence before saying that there’s none to be found, and are required to take some measurements before coming to scientific conclusions. So let’s do just that, using PhiMatrix design and analysis software to overlay golden ratio grid lines that are accurate to the pixel. Test it yourself if you want by using the free trial of the software to create the same phi-based grid lines.

Compare the fit of celebrity faces to the golden ratio

This first gallery compares the fit of four of the celebrity faces to the horizontal golden ratio proportions often found in attractive faces. The most basic of these is found in the distance between the pupils and bottom of the chin in relation to the lip/teeth line and tip of the nose. Photos need to be taken from directly in front of the face to do this analysis. This made the image of Sylvester Stallone used in the blog unsuitable, so I found another image. Click on any image for the full resolution view: 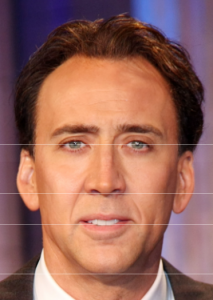 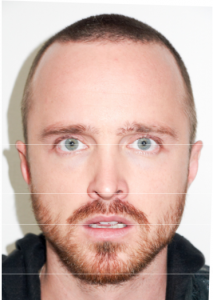 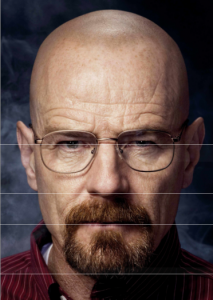 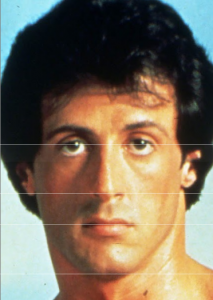 There are some slight variances in the lengths of the noses, and the two beards make perfect alignment to the chin difficult, but the golden ratio of the distance from the pupils to the bottom of the chin is very close to the lip/teeth line in all four faces.

This second gallery illustrates how these four celebrity faces fit the vertical golden ratio proportions often found in attractive faces. The most basic of these is found in the position of the inside of the eyes in relation to the width of the face (where the inside of the ears meet the face): 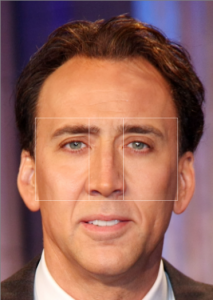 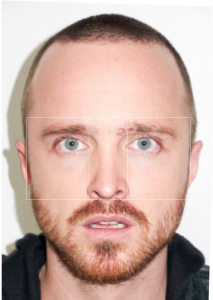 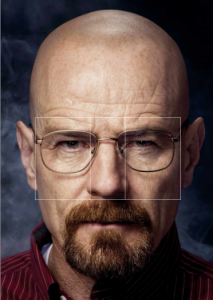 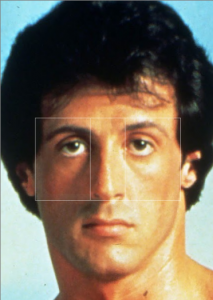 Here again, the position of the eyes of all four celebrities is an extremely close fit to the golden ratio of the width of the face. Many other golden ratios can be found in attractive faces, as illustrated in my analysis of the winner of Britain’s most perfect face contest and my analysis of a 2009 university study on attractiveness.

Every face is unique, and not all fit the golden ratio.

There’s one celebrity missing. The one celebrity in the Kochmala’s blog who didn’t fit these golden ratio proportions quite as well is Jack Nicholson. Here too I had to substitute a photo taken from directly in front of the face. By applying the same golden ratio grid, you can see that either his jaw is either proportionately larger than the others, or, if holding the jaw line constant, that his nose and mouth are somewhat higher on his face than those of the others. The horizontal ratios from the width of the face show that the eyes are positioned slightly closer to the center of the face. Click on an image for full resolution. 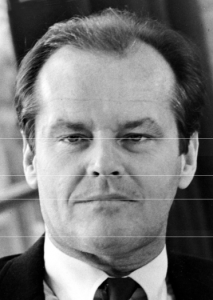 Horizontal ratio based on lip line 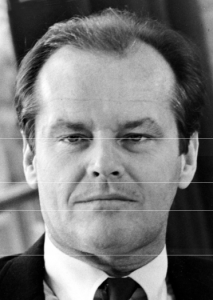 Horizontal ratio based on chin 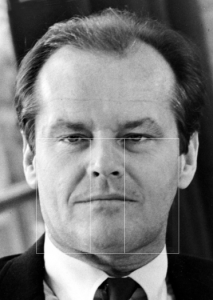 Are Jack’s facial proportions somewhat unusual? One independent answer to that question can be found in how caricature artists interpret his face. Caricatures greatly exaggerate the unusual features of a face to create a humorous, but still very recognizable, impression of it. Look how these artists represent Jack: 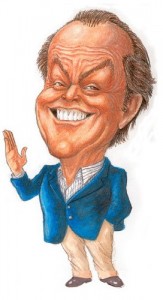 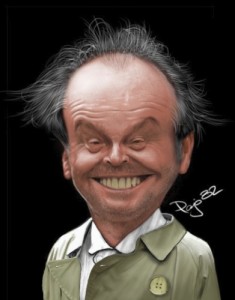 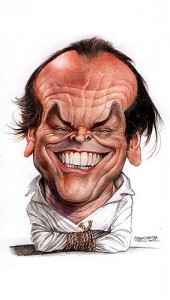 Note how his jaw is shown as very prominent. Note that the nose is shown as being small and unusually close to the eyes. This portrayal is consistent with the variation we see in his face versus the golden ratio proportions found in faces of more “classic” attractiveness. A face certainly does not need to be in perfect golden ratio proportion in every dimension to be attractive, but the greater the deviations the less likely it is to be perceived by most people as being attractive. This is confirmed by the extensive research on facial beauty of Dr. Stephen Marquardt, creator of the Marquardt Beauty Mask. Jack has some golden ratios that factor into his attractiveness, despite some of his more atypical facial dimensions.

The Mona Lisa and the Golden Ratio

Leonardo da Vinci collaborated with Luca Pacioli with his illustrations for Pacioli’s “The Divine Proportion.” Pacioli’s described the golden ratio as a “subtle and secret science” for the arts. This was no secret to da Vinci, so looking to see it in his paintings isn’t folly. As one might expect, his use of this “Divine Proportion” is clearest in his paintings of religious topics such as Salvator Mundi, The Last Supper and The Annunciation. The Mona Lisa doesn’t offer many clear, decisive composition lines, nor can we find another painting with her facing directly into the camera. Here though is how the painting compares to the golden ratio: 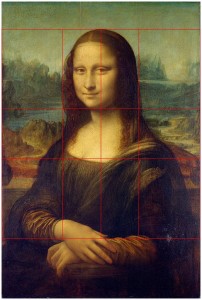 Golden ratios from center of canvas 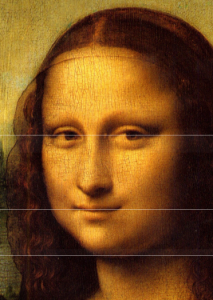 We find that Mona Lisa’s head is roughly positioned within the two golden ratios from the center of the painting to its sides, with her eye at the center of the painting. The distances of the top of the head, bottom of the chin, neckline and her arm are positioned in close golden ratio relationships. And, while her nose is a bit long, her lips are close to the golden ratio point of the distance from the pupils of her eyes to her chin, as with the celebrities above.

The evidence speaks for itself.

The golden ratio can of course be found in the facial dimensions of attractive women as well, as illustrated below and as described in my article on “Golden Ratio Myth, Fact and Misunderstanding: The missing evidence.” Not every feature of a face need be in golden ratio proportion to create beauty, but its impact on our perceptions of attractiveness is real.

A setback for objective, evidence-based journalism.

Wired.com is quick to claim the satirical celebrity images as a “setback” for the golden ratio, but that’s hardly the case. Unfortunately, it’s a setback for the quality of information in high profile online magazines, and a setback for the level of intelligence that they attribute to their readers. Readers deserve better than tabloid journalism. You deserve facts and evidence rather than unsubstantiated rumors and opinions.

As always, I encourage you to not accept everything you read as fact, to do your own research, take your own measurements and come to your own conclusions. Most debunkers don’t even look for the evidence, and those who do usually don’t take the time to do it right. I hope this article helps you to get a better understanding of the facts, and how to test them for yourself. The golden ratio is a unique in mathematics and geometry, frequently appears in nature and is used by many as a valuable tool in understanding and applying good principles in design.