Georges Seurat (1859–1891) was a French Post-Impressionist painter, who according to Wikipedia, “is noted for his innovative use of drawing media and for devising the technique of painting known as pointillism.” 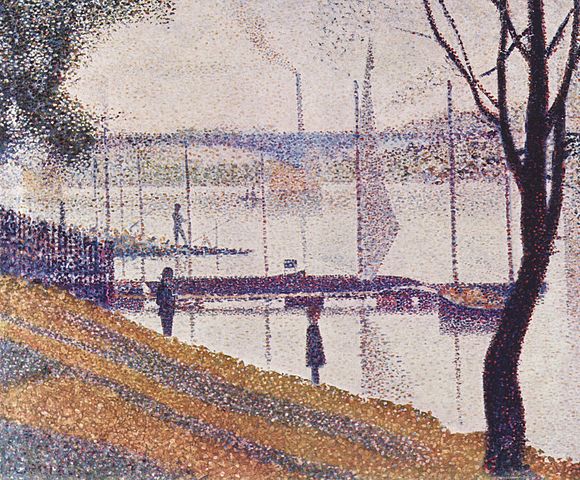 It continues, “His large-scale work A Sunday Afternoon on the Island of La Grande Jatte (1884–1886) altered the direction of modern art by initiating Neo-impressionism. It is one of the icons of late 19th-century painting.”

Did Seurat “attack every canvas with the Golden Ratio?”

The book “Mathematics” by David Bergamini stated that Seurat’s painting “La Parade de Cirque” contains numerous examples of Golden Proportions” and includes a quotation attributed to “one art expert” (identified in the book The Golden Ratio by Dr. Mario Livio as Matila Ghyika) that Seurat “attacked every canvas with the golden ratio.”  A very interesting claim indeed, but is it true? Others say it’s but a myth to be dispelled.

Maybe not “every” canvas, but apparently a third or more

There’s also a quotation that says “a picture is worth a thousand words”, so rather than offer another 10,000 or more words on the subject, below are twelve Seurat paintings with golden ratio lines overlayed using PhiMatrix golden ratio design and analysis software.  Click on any of them for a larger image with more clarity of the features and lines. Of the 103 Seurat paintings shown at Wikimedia Commons, these 12 below and about 20 more (see page 2) show evidence of at least one significant composition line or element whose placement appears to have been based on a conscious decision to apply the golden ratio.

Golden Ratios on canvas height and width, not arbitrary points

De-constructing an artist’s intent and method of art composition can seem arbitrary when applied to design elements within a painting.  In all the paintings analyzed, the golden ratio lines are simply based on the height and width of the canvas to eliminate any possibilities that the dimensions analyzed were based on arbitrary points.  Not all of Seurat’s paintings show golden ratios like the ones shown below and the other 20. Accordingly, it may be difficult to conclude that Seurat “attacked every canvas” with golden ratios, but it seems that he used the golden ratio in the basic composition in at least a third of his paintings.

There are many claims made about whether various artists used the golden ratio, even Leonardo Da Vinci, who created the illustrations for the book “The Divine Proportion” by his contemporary, Luca Pacioli. To make accurate assessments, you need tools that can easily identify golden ratio proportions, and an approach to the search that is unbiased, either for or against, with respect to appearances of the golden ratio. It may be that other golden ratios can be found in the various lines and focal points within many of Seurat’s paintings as well, but I’ll leave that to you the reader to pursue in more depth and to come to your own conclusions. Wikipedia Commons has a good collection of images of the paintings of George Seurat as a great place to start, and PhiMatrix has a free two week trial for you to use in your investigation. Click on any image below for a larger version: