Seurat as the Creator of Pointillism

As discussed on page 1 of Georges Seurat and the Golden Ratio in Art Composition, Seurat “is noted for his innovative use of drawing media and for devising the technique of painting known as pointillism.”

Seurat and the Golden Ratio

Seurat is also said by one art expert to have “attacked every canvas with the golden ratio.” Some have claimed this is nothing more than a myth to be debunked. I did my own investigation using PhiMatrix golden ratio design and analysis software, examining the 103 Seurat paintings shown at Wikimedia Commons. To avoid any claims that the results are biased or arbitrary, I based my golden ratio measurements solely on the height and width of the canvas. The paintings selected were based on the appearance of composition lines or elements that seemed to exhibit a conscious decision on the part of Seurat to apply the golden ratio. All golden ratio lines shown are calculated by the software and their placement on the painting is precise to within a pixel on the screen. I found golden ratios on this basis in about one third of Seurat’s paintings. Some may be subject to a little interpretation, but then some that were only close to golden ratios were excluded from the results as well. In addition, I found a number of golden ratios within the key features or elements of the painting themselves, and have included only two examples at the end of this article.

Explore, decide for yourself and learn

The results of this study are shown below. Click on any of the individual images below the slide show for a larger image with more detail and judge for yourself. The first group illustrates Seurat’s application of the golden ratio in horizons and focal points:

Note the position of the two trees and shaded area

This second group illustrates applications of the golden ratio in human form paintings and other subjects that are either more subtle or less precise.  Click on any image to review in high resolution:

In other instances, Seurat may have used the golden ratio for composition of elements within a painting rather than basing the composition simply on its height and width. The example below illustrates apparent use of the golden ratio. The painting on the left shows golden ratios of the height and width, which reveal nothing. The painting on the right shows golden ratios that appear to have been used in the positioning of the men and the buildings in relation to the right side of the painting. Many other similar examples can be found in Seurat’s paintings where the artist’s intent seems clear, and not the result of simply searching for golden ratios afterwards. 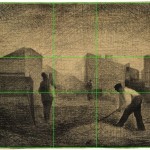 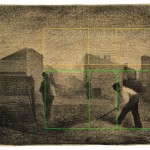 If Seurat did “attack a canvas with the golden ratio,” we would expect to see golden ratios between elements within the composition and not just based on the simple height and width of the canvas. The painting below shows a number of rather clear and precise applications of the golden ratio. Measure them for yourself though and come to your own conclusions. Golden ratios can be found in:

Click on the thumbnail below and then click on the View Full Size button to see the image in full resolution. 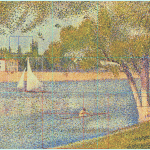 If you have any remaining doubt that Seurat used the golden ratio consider this: About one-quarter of his paintings had dimensions based on golden rectangles.