You are here: Home / Geometry / Phi and Fibonacci in Kepler and Golden Triangles

Creating a Triangle based on Phi (or Pythagoras meets Fibonacci):

Pythagoras discovered that a right triangle with sides of length a and b and a hypotenuse of length c has the following relationship:

A foundational equality of phi has a similar structure:

By taking the square root of each term in this equality, we have the dimensions of a triangle, known as a Kepler Triangle, a right triangle based on this phi equality, where: 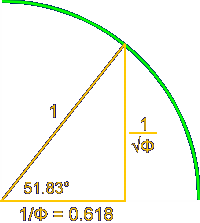 Although difficult to prove with certainty due to deterioration through the ages, this angle is believed by some to have been used by the ancient Egyptians in the construction of the Great Pyramid of Cheops.

Other triangles with Golden Ratio proportions can be created with a Phi (1.618 0339 …) to 1 relationship of the base and sides of triangles: 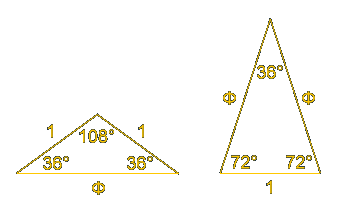 The isosceles triangle above on the right with a base of 1 two equal sides of Phi is known as a Golden Triangle.  These familiar triangles are found embodied in pentagrams and Penrose tiles.

Creating a Triangle based on Fibonacci numbers

Thus for the illustration highlighted in gold, Stange’s Treatise on Fibonacci Triangles reveals that a triangle with sides of 5 and the square root of 39 (e.g., 3 x 13) will produce a right triangle with a hypotenuse of 8.

As greater numbers in the series are used, the triangle approaches the proportions of the phi-based Kepler Triangle above, with a ratio of the hypotenuse to the base of Phi, or 1.618…